The Takeaway: On-demand vaccine transit and the future of pop-up microtransit services

Key highlights from “Pop-up transit: How to launch a vaccination service”, Spare’s webinar on how to create ad hoc transportation using on-demand microtransit.

The campaign to vaccinate people against COVID-19 has shone a spotlight on transportation gaps in healthcare — a gap that’s long-existed, says Kelly Coyner a mobility consultant and CEO of Innovation4Mobility.

During Spare’s webinar on how to best close this gap through transit, Kelly was joined by Chris Mandrell, general manager for Citibus in Lubbock, TX, Julian Schrögel, project manager, on-demand transit, for Rhine-Neckar Transport (rnv) in Mannheim, Germany and Quinn Kliman, partner success lead at Spare. The webinar touched on how and why the two agencies used on-demand transit as “pop-up transit” — a temporary service created to fill a specific need — to get people to and from vaccination centers in their respective regions, as well as what they’ve learned by deploying this type of service configuration. 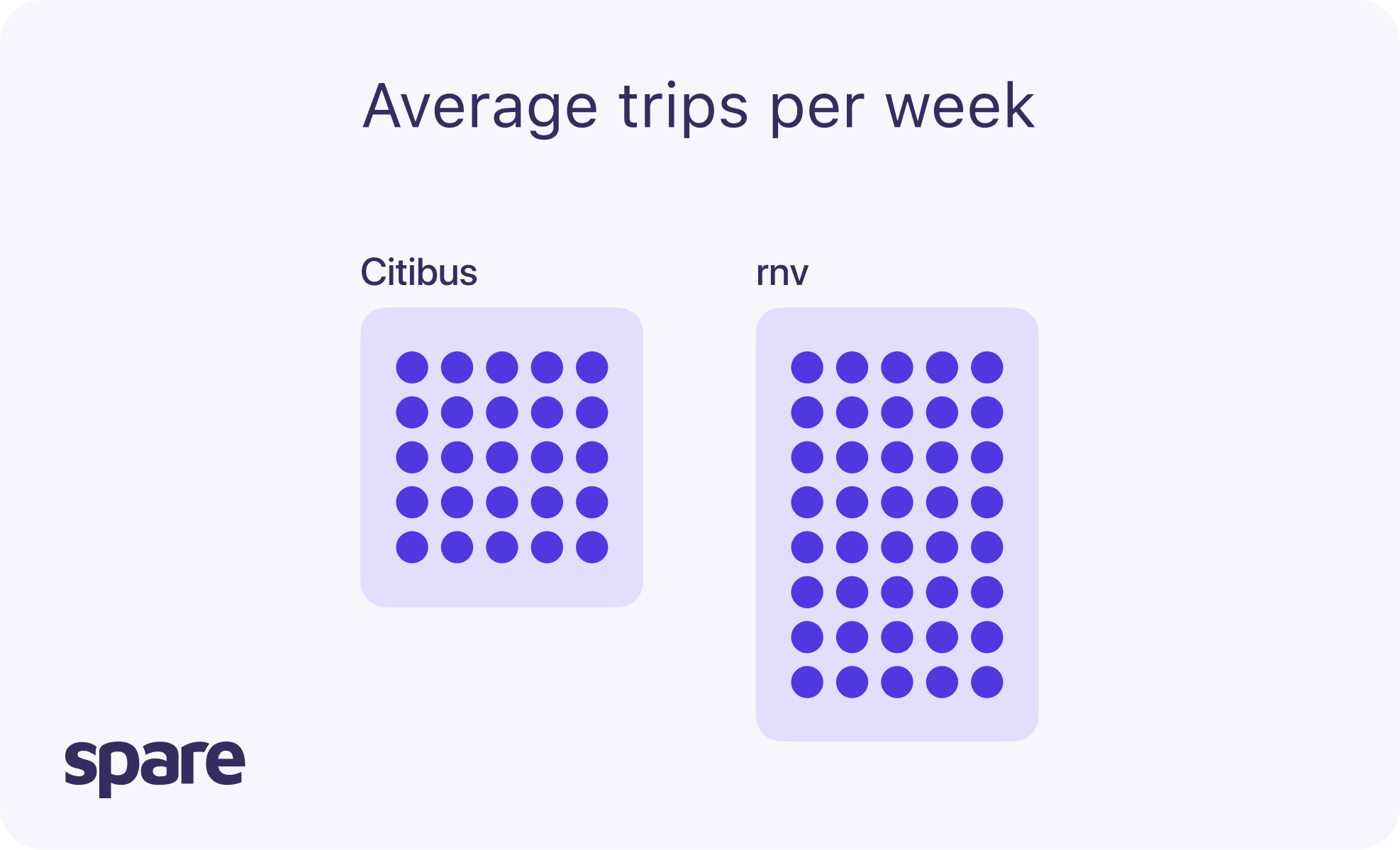 We need to create equitable access to the COVID-19 vaccine

Citibus in Lubbock covers a largely rural area in west Texas. This is a region with a big car culture and so locally, people might overlook the need for transit to access important services, Chris explains.

Initially, vaccines were only being given at the local convention center. “This really sparked conversations on how to provide equitable access to the vaccine,” he adds.

With existing on-demand paratransit and microtransit operated through Spare, Citibus used its knowledge to quickly create a special service exclusively for vaccine transportation, extending coverage beyond its regular zones to accommodate people in need.

“This was something that nobody really ever thought that we would be able to do, or that the community would actually need… [But] the people that don’t have the big trucks to drive down our big roads still need equitable access to those vaccinations.”

When we think of specialized transportation, we often think that it is for people with special mobility needs. Kelly invited us to consider that in terms of the vaccine, it’s not just this group that might require transit. There are people with children, people who are too anxious about getting their vaccine to drive and those who don’t qualify for free fixed-route transit but can’t afford to take a taxi or some other type of more expensive transportation to a vaccine site.

In Citibus’ case, the pop-up element allowed it to customize the service to meet its needs. That meant implementing mandatory advanced bookings, slotting an additional 15 minutes per booking at the vaccination site to account for the required post-jab waiting period, and removing fares for riders booking this service. Because Citibus already had a microtransit platform in place, setting up this special configuration was simple and quick.

“For [Citibus], it was as easy as going into the platform, expanding the service area, putting a zone around a vaccination center and then advertising that through the [on-demand] app and its normal communications channels,” Quinn explains. 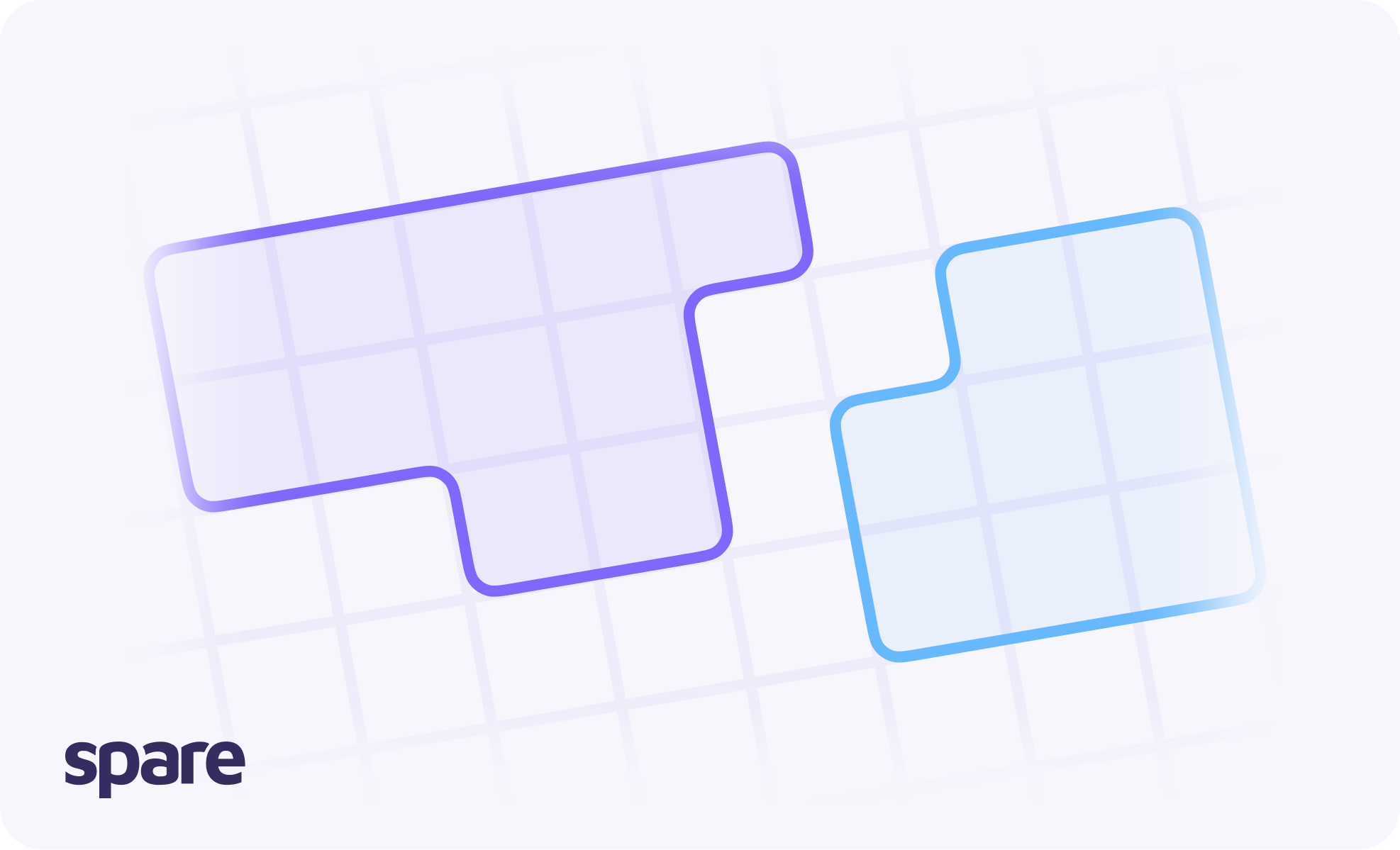 The COVID-19 pandemic has adversely affected agencies around the world. Ridership is down and many agencies have suspended fixed-route buses or cut back on timetables.

Chris says that when he started in his role three years ago, public transit meant fixed-route but COVID has really pushed agencies to think beyond traditional bus routes.

“We had to figure out the services our riders required. We cut service, which created bigger service gaps than we already had and so we had to do something to try and fill that gap.”

That’s when Citibus turned to on-demand transit. Prior to the pandemic, the agency was only serving 60 per cent of its city. On-demand has allowed it to extend coverage and the pop-up vaccine service has initiated conversations on how else it can use this type of configuration.

Citibus is currently collaborating with an alternative school in Lubbock whose students aren’t served by the local school bus company to see how the agency might create a specific service that helps get students to class during the year.

“Ultimately, maybe these kids will turn into long-time riders. They’ll turn things around and become productive members of the community. It all starts with the transportation of these kids to and from school,” Chris says. 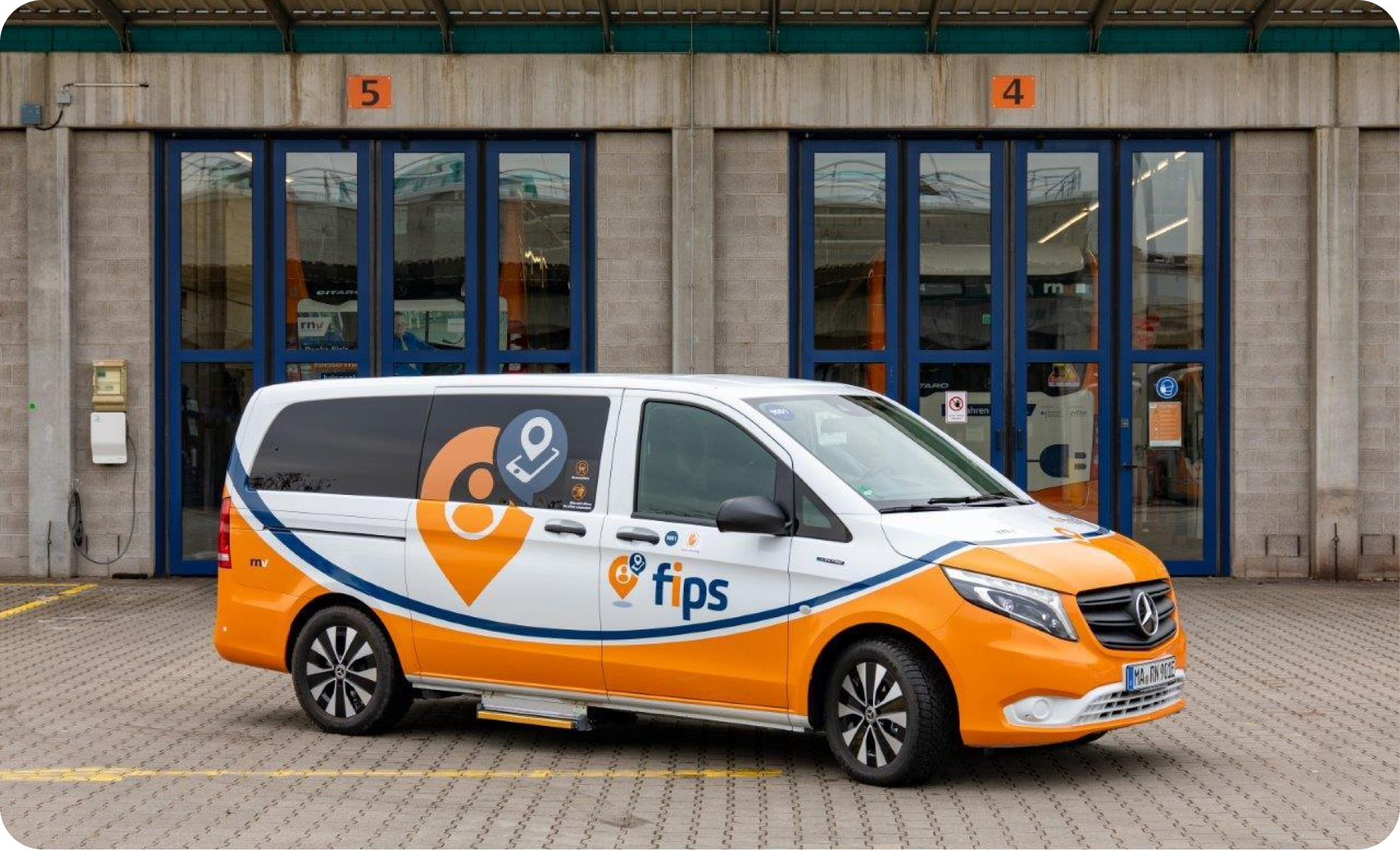 Like Citibus, Rhine-Neckar Transport (rnv) in Mannheim, Germany also recently launched an on-demand pop-up transit service that brings people to and from vaccination centers. In its case, the service is targeted at people aged 80 and over.

Prior to this service, the city had no experience with on-demand transit. Rnv was actually set to introduce microtransit in 2020 but the pandemic and ensuing lockdowns put that deployment on hold. As the vaccination campaign kicked off in Germany, there were a lot of questions around logistics and how to get people to the vaccine, says Julian.

There was particular concern around transportation for the most vulnerable population — seniors, many of whom don’t own a car, he adds.

Because rnv already had the resources in place for on-demand — vehicles, drivers and Spare’s software — the agency saw it as the perfect solution to this problem and a way to kick-off its on-demand microtransit program.

Julian says that the pop-up vaccine service is actually helping the agency to inform its offer going forward. “The biggest lesson we learned is that this is a very specific group with specific needs. And we did take a lot of learnings from there that we will carry over to our regular service.”

For instance, the pop-up service helped rnv to figure out how best to communicate with elderly riders about on-demand transit. It also brought about a number of use-cases that the agency would never have otherwise discovered, including requests from doctors asking if they could use the service to get patients to and from their clinics for appointments.

“We might not make a specific service, but we might enable the clinic to book for their patients,” Julian says.

A pop-up service can exist outside of traditional frameworks

In some ways, the COVID crisis has helped transit agencies break free from the red tape that might normally make it difficult or slower to innovate.

“It’s often not the technology, but the procurement cycle,” says Kelly. She points to emergency COVID funding in the United States that is allowing transit agencies to bypass that traditional process.

“I think that what we'll see coming out of the use of pop-up transit for vaccinations is a sustainable model for continuing to get people to repeat vaccinations over time... But it also opens up another way to use our resources to get people where they need to go, specifically to healthcare, over the long-term.”

For rnv, its vaccine transit demonstrated that in a crisis, the agency could provide flexible solutions and work with authorities to launch a successful and useful service in days, says Julian.

“The pandemic has definitely brought to the fore that flexible software solutions can add much more value than many previously thought they could. They really let you respond quickly and effectively to different events happening in your community. Whether that is delivering vaccines or responding to a natural disaster, or any other event where you may need to quickly set up a transportation service,” adds Spare’s Quinn. 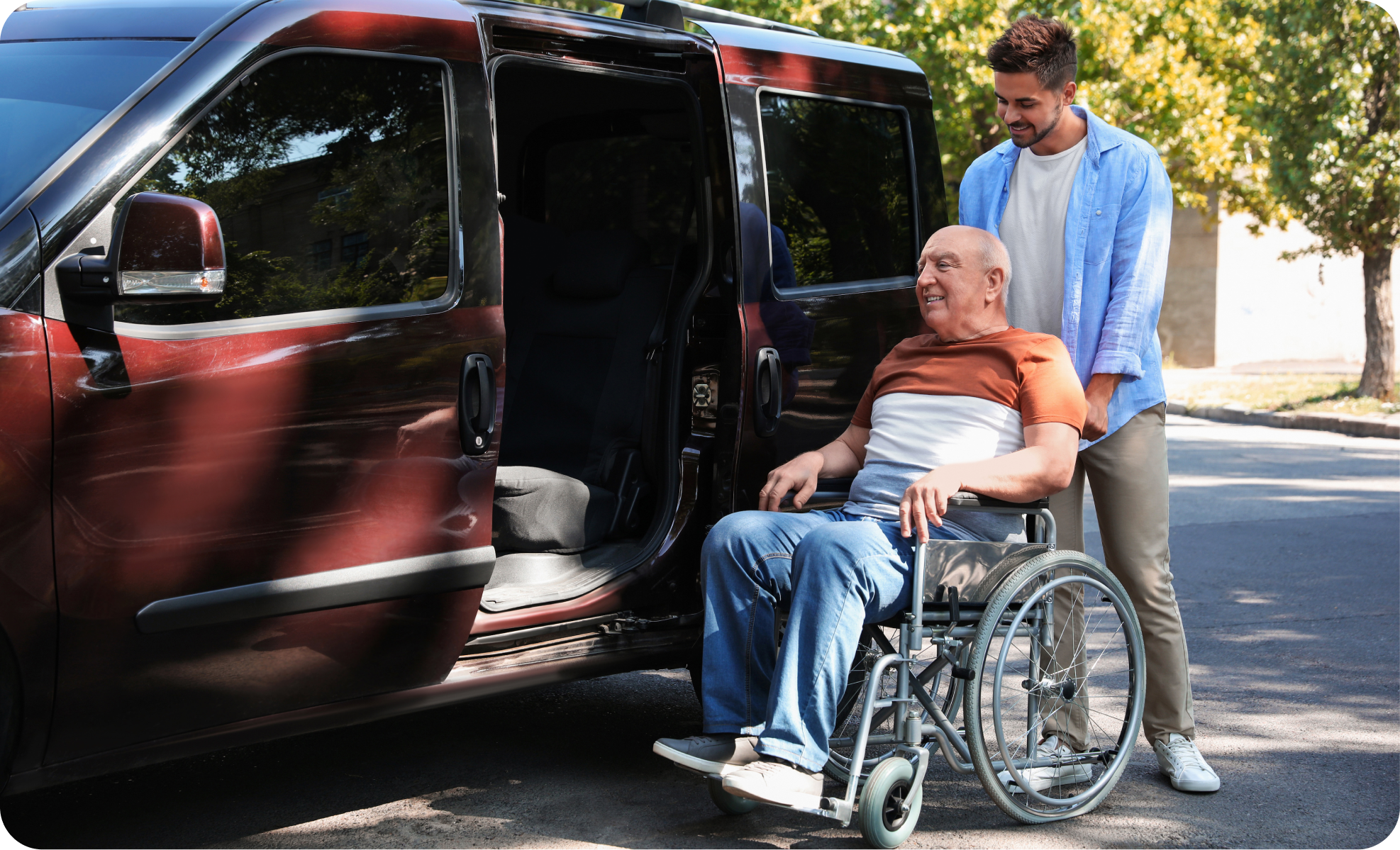 Any transit provider can offer a pop-up service

In terms of vaccine transportation, we’ve seen many different providers step up to the plate. Kelly points to the conversion of charter buses into mobile vaccination clinics as a particularly interesting use-case.

“It doesn’t literally take the vaccine to your door, but it takes it to your neighbourhood.” Though transit agencies may not have the available resources to do something like this, charter buses, many of which have remained parked during the pandemic can.

Once the pandemic is over and communities no longer need vaccine transportation, Quinn thinks that pop-up services using flexible software solutions such as Spare are likely to stick around and be put to use for everything from sporting events to delivering meal kits to the homeless — any area where they can provide value.

Kelly concluded: “We know that we need to find ways to have more flexible forms of shared transportation, and we know the limits of what a fixed-route transit system can provide. I'm hopeful that the pandemic will drive us to find new solutions to fill in gaps and also to make transit available to people who didn't have it before.”

To find out more about how you can launch a pop-up on-demand microtransit service for your vaccination campaign or any other event, get in touch a [email protected]