AnnouncementRead how microtransit can be used to transport at-risk individuals to COVID-19 vaccination sites.Learn More →
データ分析

We dig deep into a large travel survey of Spare riders, to unpick important issues around gender, age, ethnicity and disability in public transportation and microtransit specifically. 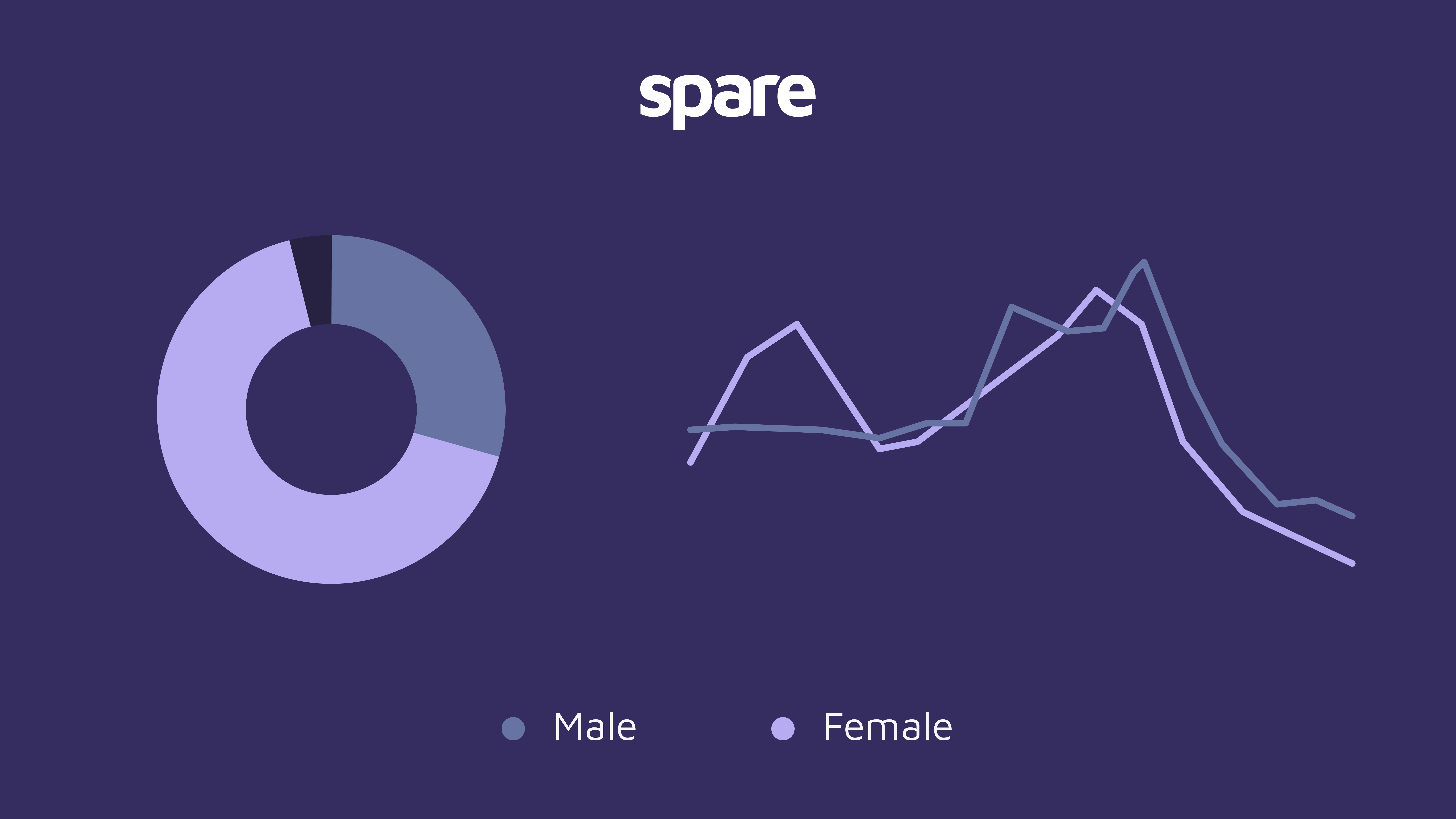 In a previous blog post, we presented a massive travel survey we sent to thousands of riders across dozens of Spare services. Our data revealed how the transportation landscape is being reshaped by riders moving away from private vehicles, buses and active travel, to shared on-demand transit.

This sort of survey brings huge value to transit planners: if they can better understand the diverse needs and behaviours of their riders, they can tailor services to improve the experience for all. That philosophy sits at the core of transportation equity, a concept describing how transportation ‘goods’ and ‘bads’ are distributed among different populations.

Diversity makes the world go round

Perhaps the most striking example of a lack of transportation equity is that between men and women. The gender data gap – which refers to our world being designed for men because data is only ever collected about men – is very real. Fortunately it is gaining increasing attention thanks to a vociferous group of activists and journalists campaigning to redress the issue.

Yet large data gaps exist for pretty much any marginalized group you can think of, whether that’s based on their age, ethnicity, disability and or any other characteristic.

We call this the ‘diversity data gap’, and we firmly believe it has to close for public transport to work for all those who need it most. Everybody has different needs, expectations and behaviours when they travel, so we shouldn’t be designing one-size-fits-all solutions based on flimsy assumptions. When planners rely on unintentionally or implicitly biased data, they ignore huge chunks of their riders – at best. At worse, they can perpetuate historical failings that make the situation much worse for disadvantaged groups.

In some ways, closing the diversity data gap is simple: it starts with collecting the right data, at a granular enough level to paint a meaningful picture of transportation diversity. So we asked our survey respondents to voluntarily disclose certain socio-economic characteristics. This allowed us to disaggregate our findings by key rider groups, and it revealed some fascinating insights.

There has been an alarming failure to include women (i.e. anyone identifying as a woman) in the transit conversation. This failure, points out Caroline Criado Perez, a celebrated social activist and journalist, results in women becoming invisible in the transportation sphere. There are two main reasons for this.

First, transportation is a heavily male-dominated field, especially in leadership positions. This means that the lived experiences of women are seldom accounted for in investment and transit planning decisions.

Second, gender-disaggregated data is rarely collected, because it is seen as difficult or unnecessary. It then becomes impossible to disentangle the travel needs and behaviours of women from the ‘typical norm’ that transit has been designed for: the solo male commuter.

Our survey revealed that over two thirds of Spare’s riders identify as women. This may seem high, but in reality it’s very similar to the breakdown of transit riders across the world. On average, women outnumber men by 2:1 on public transit. 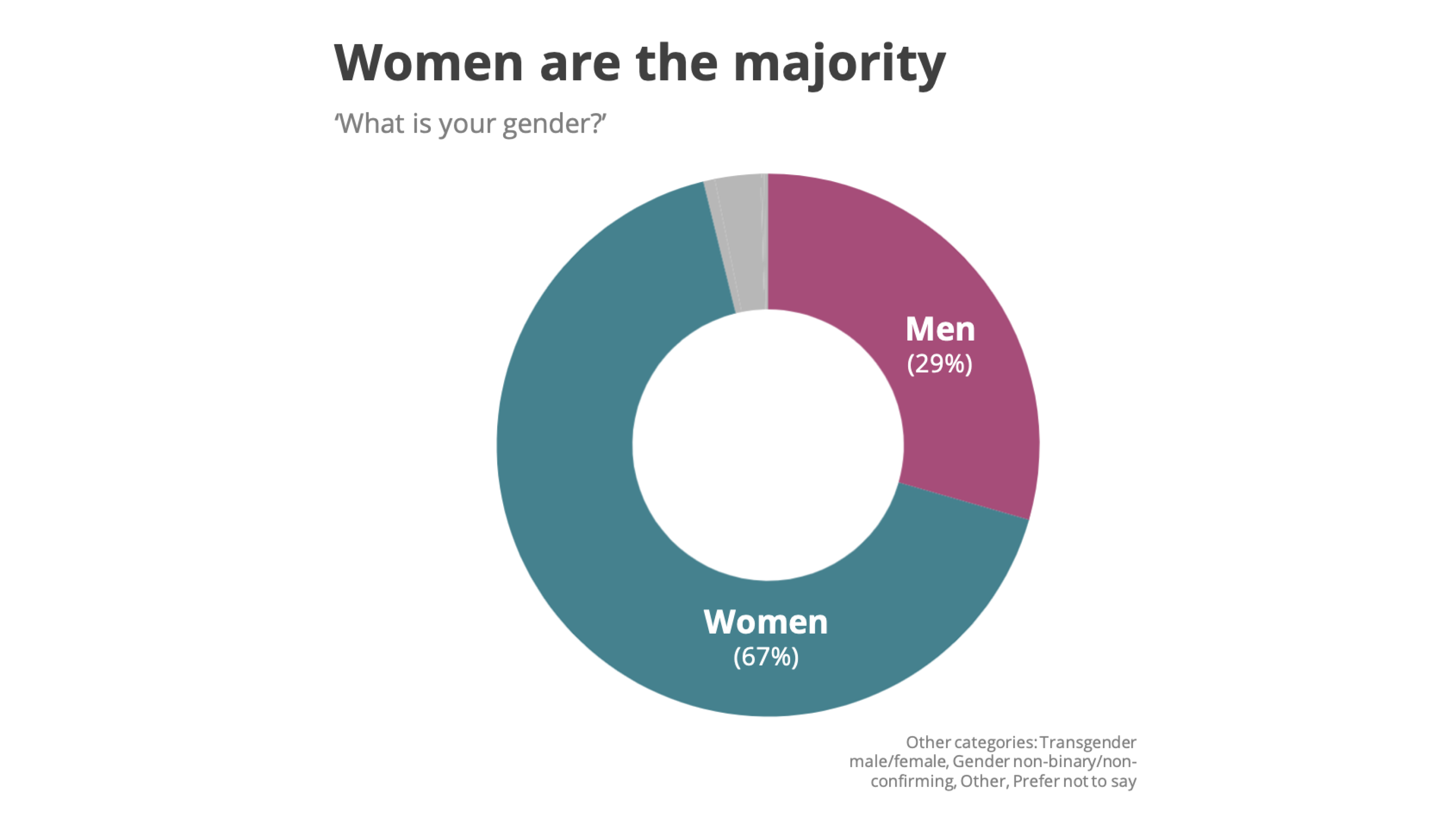 It’s encouraging to see that on-demand transit empowers women to move around their communities. However, it does also mean women are more exposed to travel burdens such as cost, stress and safety risks associated with transit. Women make up the majority of the ridership, yet they suffer disproportionately more than men from verbal, physical and sexual harassment.

We know safety is a particular issue for many women, and it’s reflected in our survey data. We found that women’s peak travel hours are 1–2 hours earlier than men, and women are 32% less likely to travel after 6pm than men. As an industry, we can do a better job of designing services that address these subtleties, particularly those arising from night-time safety concerns. 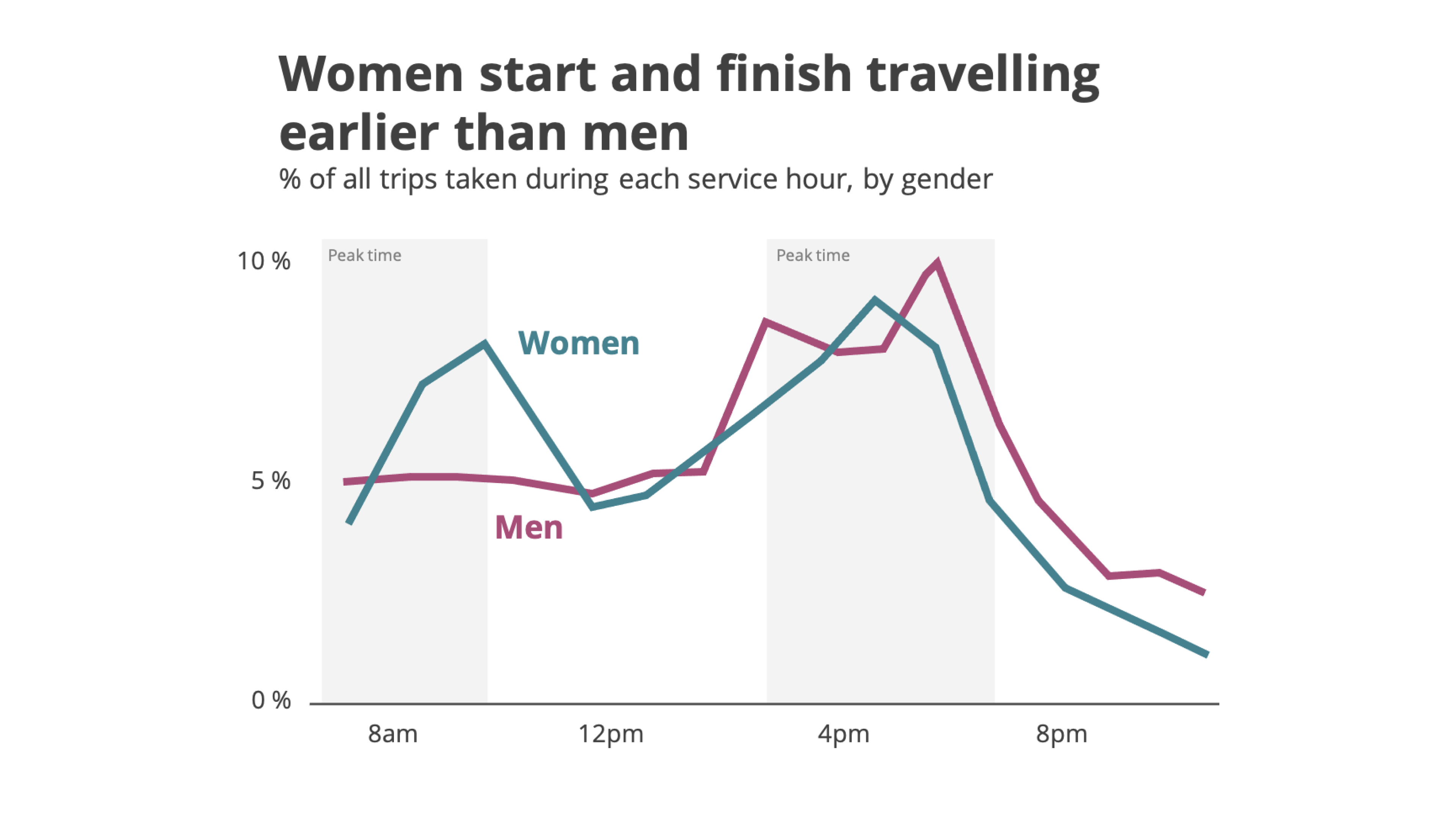 Another way women travel differently to men is their increased likelihood to ‘trip-chain’ – that is, to make several stops along the way to other destinations. This is largely because women spend up to 10 times more time on unpaid care work than men, and are far more likely to take trips that serve the needs of somebody else.

Our survey data shows evidence of trip-chaining across most of our services. On average, women’s trips are 25% shorter than men’s, and women travel 10% more often than men. Women also wait 22% less time for their ride, probably because their trips are more evenly distributed across peak and non-peak periods. 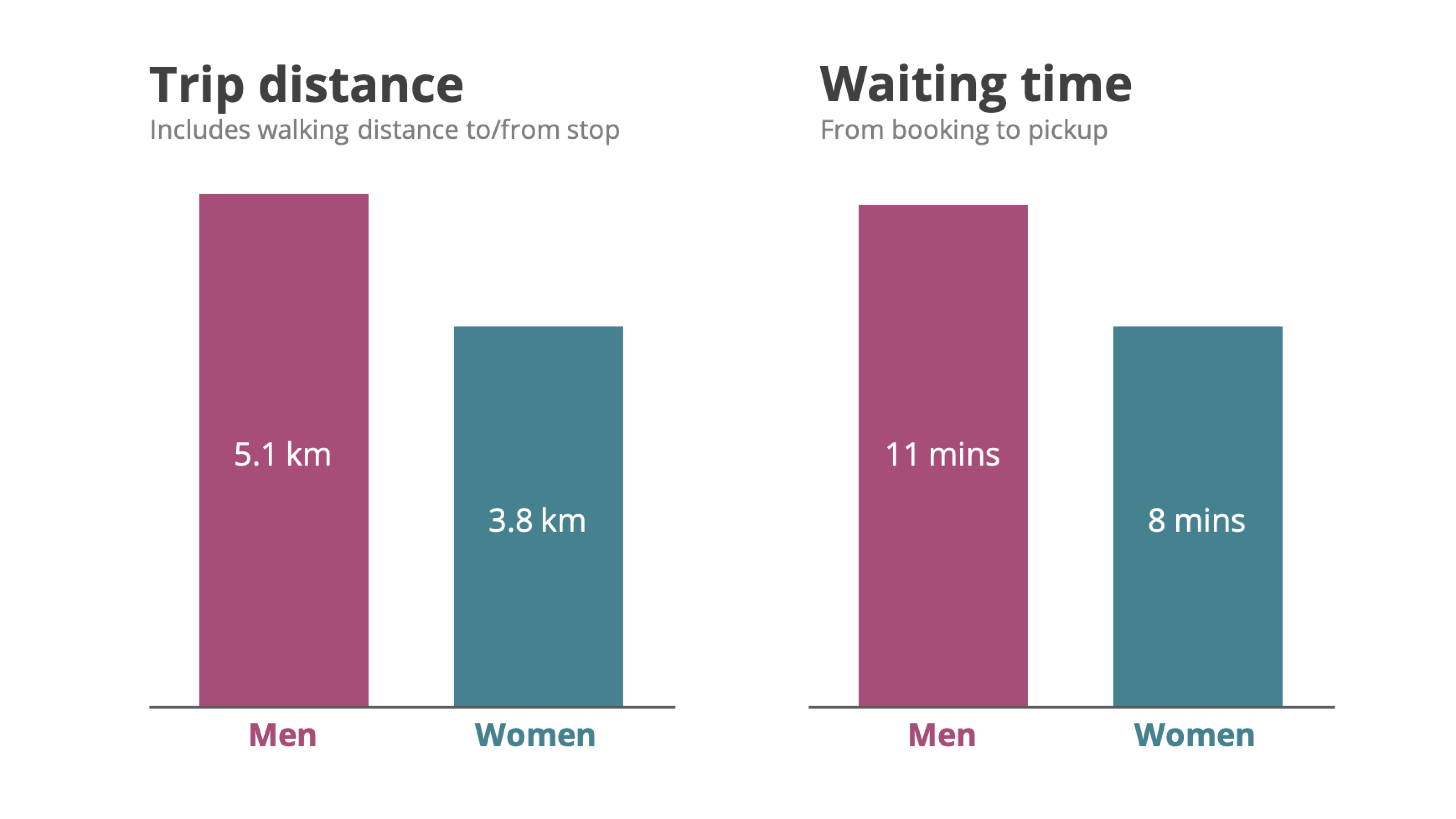 On-demand transit makes trip-chaining easier, but it is important to ensure that those who travel this way are not penalized financially. Creative service design can help, such as Transport for London’s ‘Hopper’ fares, which allow riders to make unlimited journeys in an hour rather than being charged per trip. The Hopper fare concept has spread rapidly in mass transit spheres, but it has seen limited adoption in the context of on-demand services. Isn’t it time that changed?

Age is just a number... but it matters

It seems obvious that a senior should ride transit differently to a teenager. Yet the transit industry does not systematically disaggregate travel needs by age group, meaning that the supply of vehicles does not always match demand for various trip types across the day.

The vast majority of adult (18–64 years old) riders may well be commuters, but other activity types dominate among younger and senior riders. For example, knowing that seniors take a high proportion of shopping and healthcare trips means an agency can adequately plan the sorts of vehicles they can deploy in different parts of their service area.

Unfortunately, we did not give respondents the option of ‘childcare/family care tasks’ as a reason for travel, and on reflection we realise that our primary group of riders – women – may be taking these sorts of trips. We acknowledge our survey design wasn’t perfect, so we’ll be making changes to improve next time around! 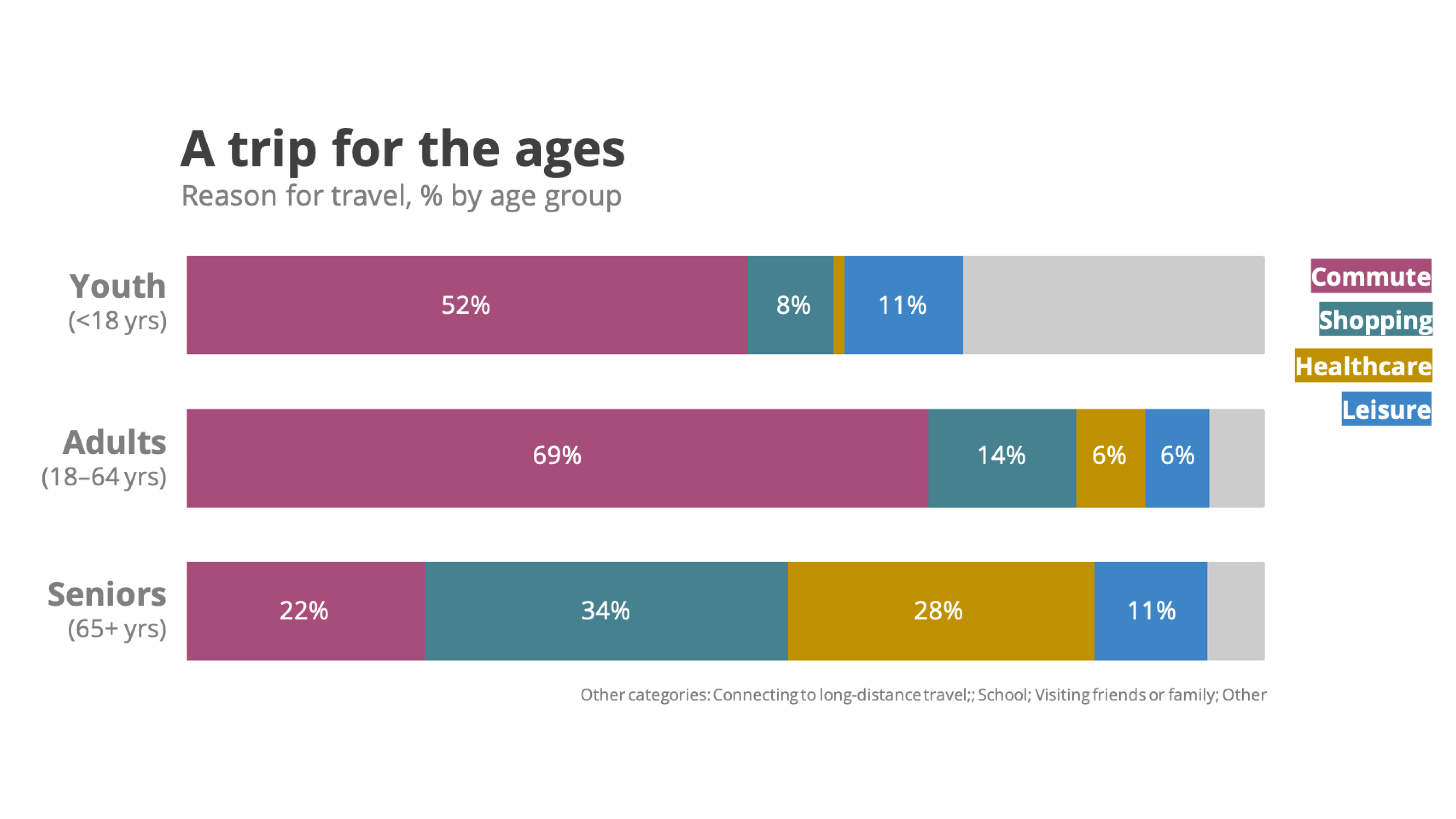 Our unique survey data allows us to go one step further and analyse the distribution of trip types across the day. We focused on the two most common trip types – commuting and shopping – and disaggregated them by age group.

Why should agencies care about when different age groups travel for specific reasons? Because it gives operators the ability to fine-tune their vehicle supply to match the type of demand. Senior riders on a shopping trip may require more space for shopping bags and ramp-ready vans, whereas young commuters may be more comfortable getting in and out of smaller vehicles. Similar analysis using disability data can enable planners to deploy vehicles that accommodate different accessibility and mobility needs, including guide dogs for blind riders, audio announcements for riders who are hard of hearing, and so on.

This all ensures an on-demand service can be properly tailored to the diverse needs of all riders.

We found the ethnicities of Spare’s ridership are broadly similar to the ethnic composition of mass transit in the US (remember, we only asked our North American respondents to specify their ethnicity). However, White riders are slightly over-represented and Black and Hispanic riders are slightly under-represented on our services. To improve this situation during the planning stages of an on-demand project, we actively work with our agency partners to identify underserved neighborhoods across their municipalities. 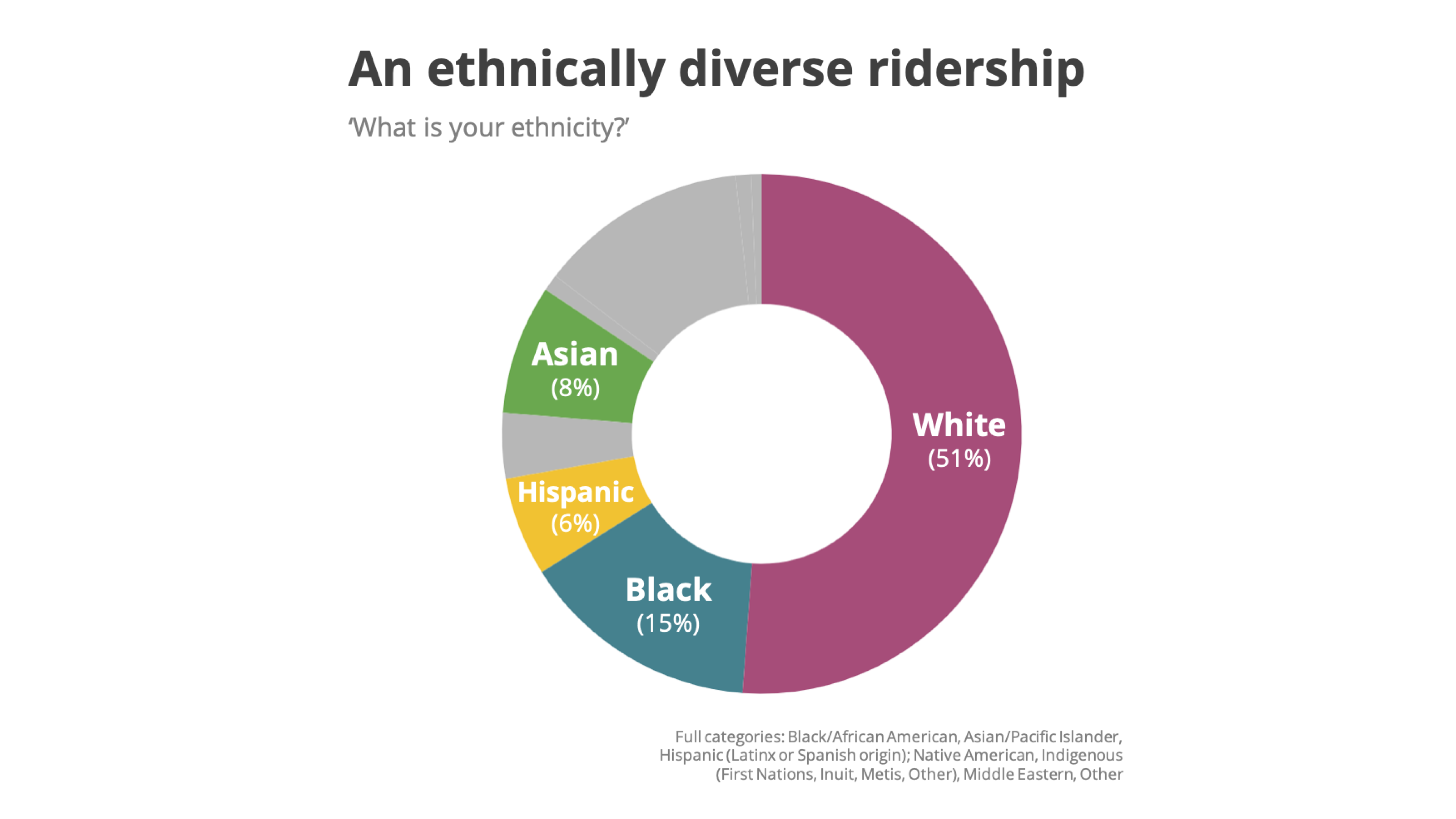 Let’s focus on White and Black/African American riders for now, as they were the two most common ethnicities in our survey. Both ethnicities travel in similar proportions in the afternoon and evening, but they diverge significantly in the mornings. Black riders travel more commonly in the early morning, and then almost not at all in the late morning; that pattern is the inverse for White riders. 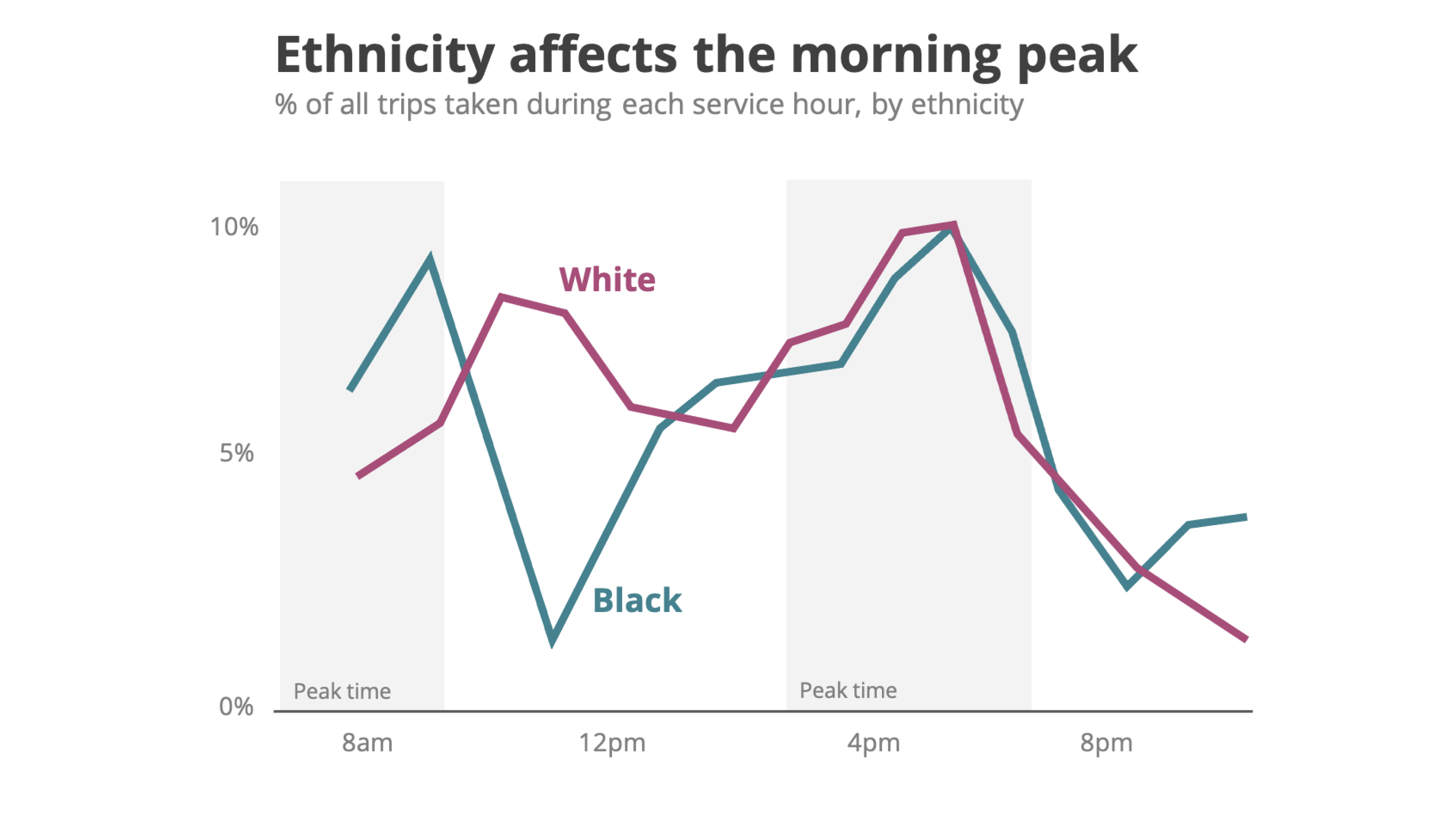 These patterns are likely a function of the different job sectors each group tends to commute to, as well as where they live. Accounting for these differences when designing on-demand transit is essential for maintaining equitable access to economic opportunity, as well as recreation, shopping, healthcare and education. We help agencies achieve these holistic goals using Spare Realize, our unique in-house simulation tool.

On average, 20% of our respondents identified with having at least one disability. This figure falls slightly short of the general disability prevalence in the US, which stands at 26%. Nevertheless, when you consider that people with disabilities are almost 50% less likely to travel on local transit than people without disabilities, our on-demand services are clearly more appealing than conventional transit options. 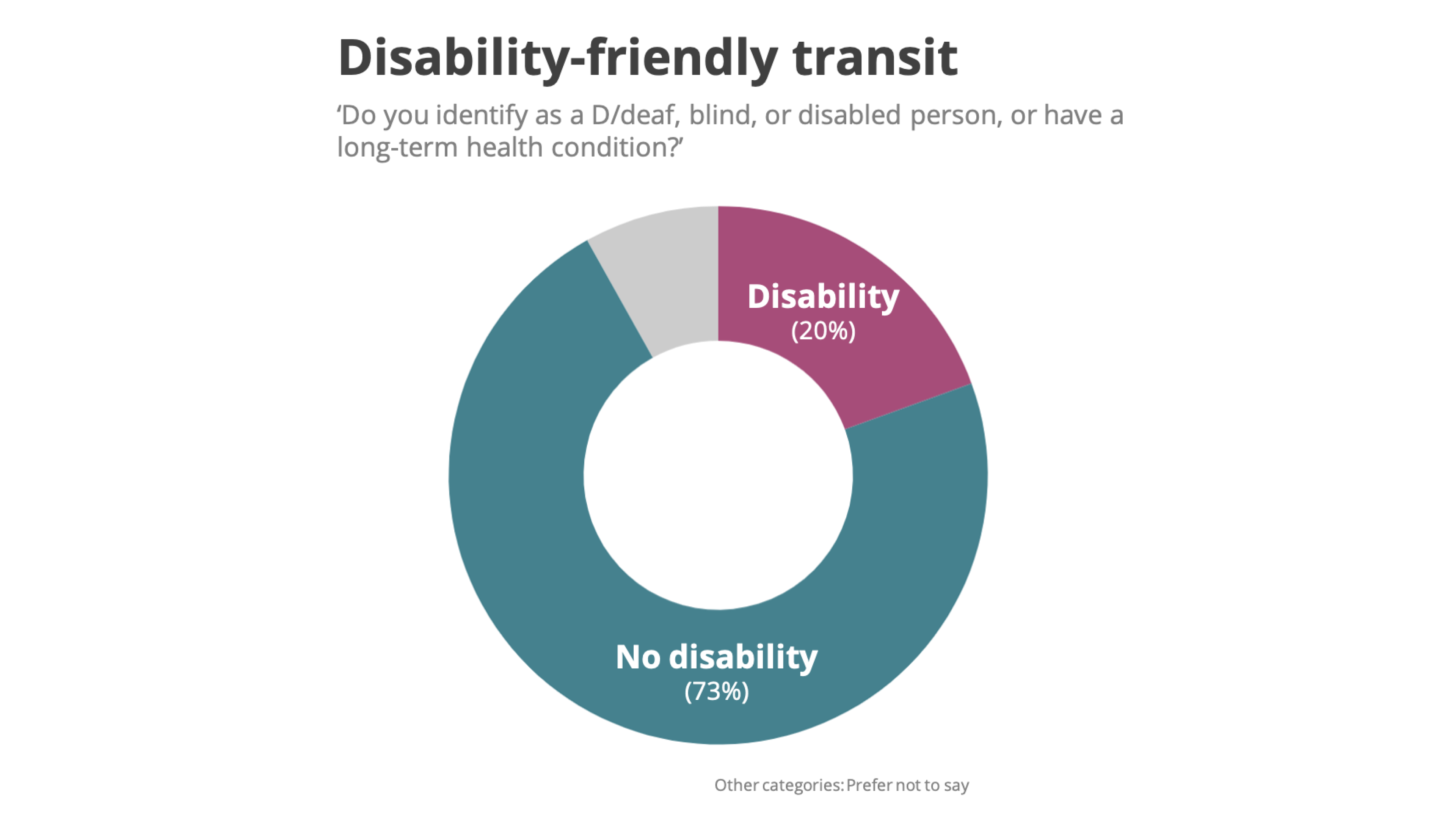 In fact, in locations where Spare powers commingled paratransit and microtransit, up to a third of riders have a disability. These riders would previously have relied solely on scheduled paratransit that cannot easily accommodate spontaneous trips. Now, they are able to make the same trips on a service that is far more convenient, yet costs much less to run. 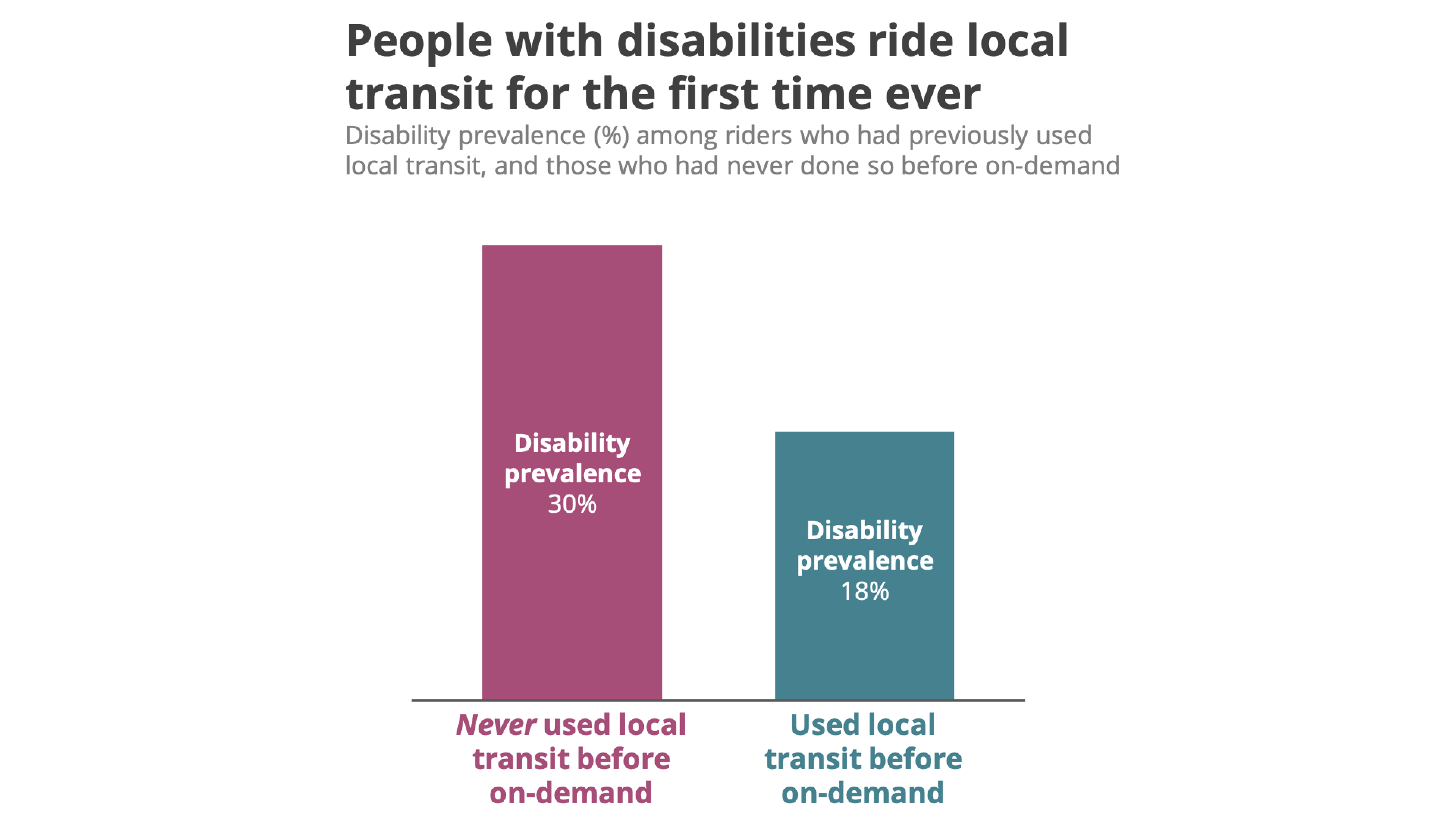 What’s more, we found that in one of our smaller services, 40% of riders never took local transit before the introduction of on-demand. Of those riders, 30% had a disability, compared to a disability prevalence of 18% among riders who had used local transit. In other words, on-demand is empowering new forms of mobility among some of the most vulnerable members of society. It’s at the heart of the mandate set out by the Americans with Disabilities Act (ADA): to guarantee people with disabilities equal and fair access to opportunities via transit.

The COVID-19 pandemic has exposed some uncomfortable truths about transit, not least that it is rarely optimized for the people who depend on it most. Rather than replicating the pitfalls of fixed-route mass transit, we should use the flexibility of on-demand transportation to overhaul transit provision for marginalized communities. For instance, the industry could better account for trip chaining, or travel patterns that fall outside ‘typical’ commuter hours.

Crucially, this will require software providers, planners and operators to make explicit efforts to integrate diversity thinking into their everyday processes. Our travel survey has shown that rich, actionable insights can be unlocked if we acknowledge that different groups of people have different travel needs, and then bother to collect disaggregated data.

The ways we design on-demand transit has repercussions across all social strata. Unless we actively choose to build things differently, we risk shutting out under-represented groups from the conversation for many years to come.

Surveys can be laced with bias if we’re not careful, so we mitigated against it wherever possible. For example, not everyone books trips through an app, so we worked with partner agencies to conduct some surveys by phone. Ultimately though, we could only collect data from riders who chose to answer, so the usual caveats around bias apply.

And last but not least: privacy. Since respondents shared private information in our surveys, we never linked survey responses to individual Rider Identification numbers in our database, nor their addresses or names. This allowed us to maintain user privacy while collecting meaningful insights at the population level.