We surveyed our riders and found that introducing microtransit induces a significant amount of new trips, removes private vehicle trips from our roads, and provides a safer and more convenient transit experience. 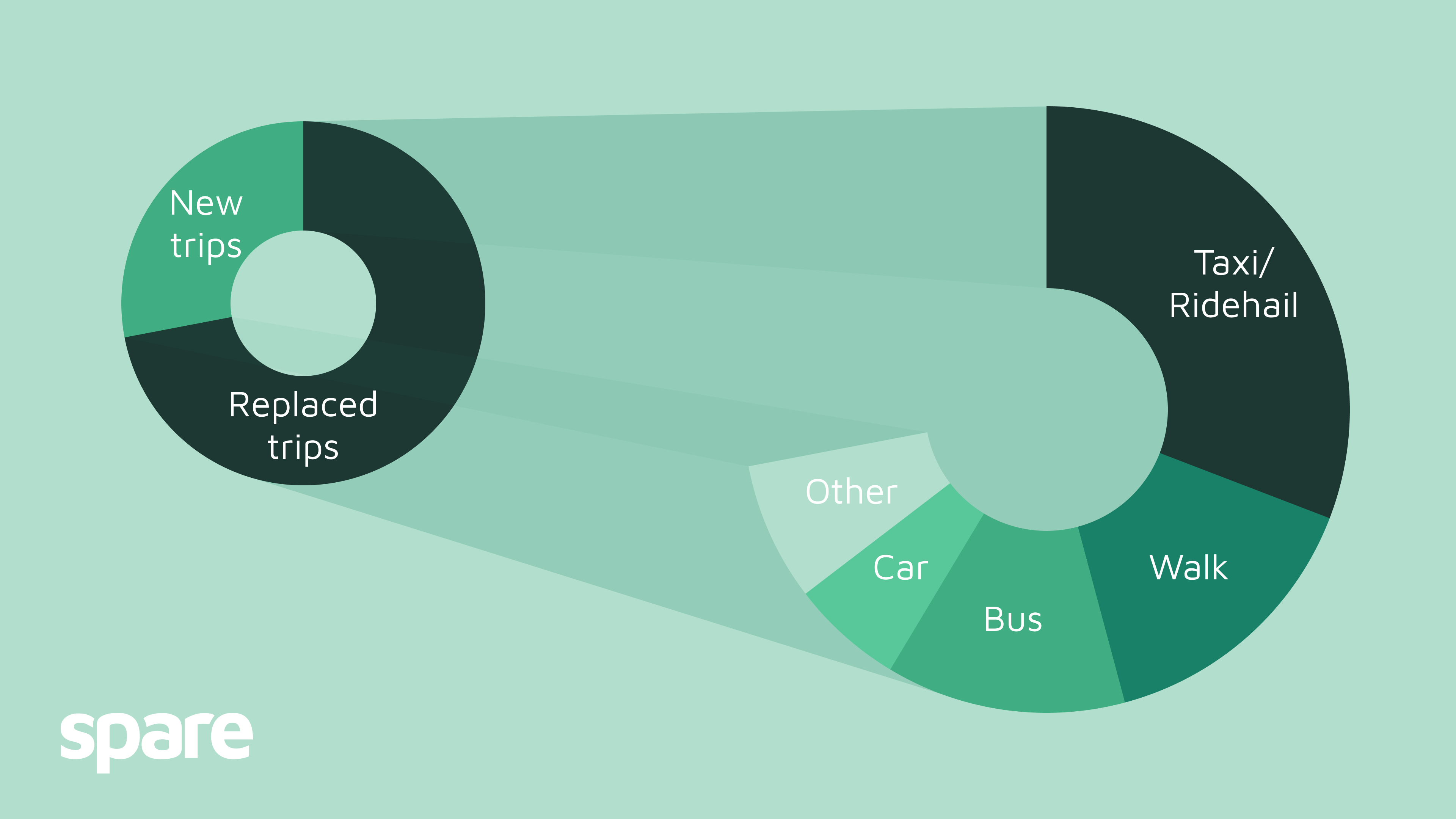 To run truly great public transit, agencies must know who is riding their services, and why they are doing so. This is especially true for new introductions to the transportation mode split – and on-demand microtransit is one of those new kids on the block being trialled by agencies across the world.

Travel surveys, the typical method for collecting such data, are difficult to carry out. But throw in a digital platform and transit planners can begin to analyse travel behaviour at an unprecedented scale.

If transit planners can better understand the needs and behaviours of their riders, they can tailor services to improve the experience for specific groups. They can also shine a light on how the introduction of a new mode of travel affects the entire transportation ecosystem, which has all sorts of implications for society and the environment.

By combining better data with planners’ expertise, and throwing in a good dose of willingness to change things for the better, we can revolutionize how transit is delivered to millions of marginalized people. Ultimately, this boosts ridership, but it also breaks down barriers for people that have historically been excluded from convenient transit.

What is not measured is not known

An old adage says that what is not measured, cannot be known. That’s certainly true when it comes to the millions of people who ride transit every day.

Inspired by our friends at the app Transit, who conducted a mega survey of 25,000 public transit users during the COVID-19 pandemic, we sent out surveys to thousands of our riders across four continents. At the end of every trip, we asked the rider to provide additional details about who they are and why they travelled, to help us answer some burning questions:

Before we run through some of the results, let’s examine what has discouraged agencies from collecting this sort of data in the first place.

Travel surveys are not new. Countries such as Denmark, Germany and South Africa have been sending out annual travel surveys to households for several decades, much like a census. In New Zealand, thousands of surveys are routinely collected via face-to-face interviews.

You can probably imagine the drawbacks of running travel surveys this way. They’re logistically difficult, and therefore very expensive, to distribute and collect. Respondents often make mistakes when filling out the forms, and their ability to recall exactly what trips they took and how they travelled heavily impacts the accuracy of the data.

At Spare, we realised we are in a unique position to overhaul how travel surveys are conducted. Our software platform powers some of the world’s finest on-demand transit systems, many of which rely on our apps to connect riders with trips. This allows us to do two things:

In other words, Spare is able to distribute surveys far and wide, and combine them with super-accurate travel behaviour. Of course, there are biases and privacy issues to account for, and we cover some of them briefly at the end of this article. But in many ways, this is the holy grail of travel surveys.

Now let’s explore some of the survey findings! For the most part we have aggregated the data across all the participating agencies, but bear in mind that our conclusions do not apply uniformly across all services.

Whenever a New Way comes along, it displaces some of the Old Way. Transportation is no exception: introducing an on-demand service in a neighborhood often cannibalises trips from other transportation modes.

To understand Spare’s impact in this regard, we asked our riders two related questions. First, would they have taken their trip from A to B even if an on-demand service hadn’t been available? If so, which transportation mode would they have used instead?

Almost one third of respondents said the on-demand service enabled them to take a trip they wouldn’t have otherwise taken. We call this phenomenon ‘inducing a trip’. It’s generally a positive thing, especially when marginalized groups (e.g. people with disabilities, seniors) are empowered to access key services and opportunities safely and conveniently. It has a beneficial impact on mental and physical health, recreation, and employment prospects. However, inducing too many new trips, particularly among groups who travel a lot already, can mean increased congestion. 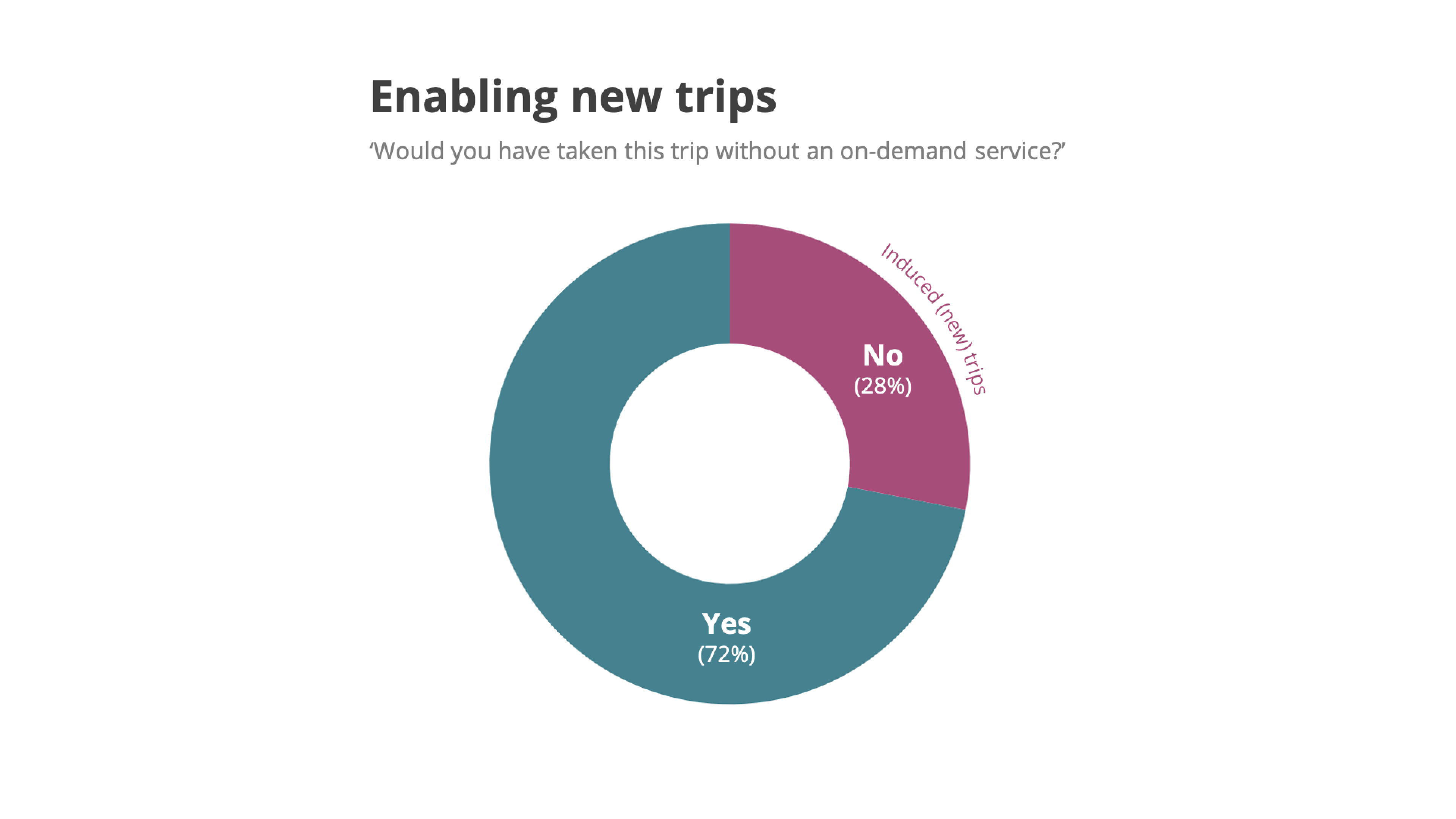 Among those riders whose trips were not induced, we observed a heartening trend: the majority (51%) of riders used pooled, on-demand transit to replace trips in private vehicles (taxis, ridehailing and cars). This is great news for reducing congestion, greenhouse gas emissions, pollution and noise!

However, our on-demand services also replace active modes of travel such as cycling and walking. We acknowledge that these travel modes are crucial for maintaining physical and mental health, and should be encouraged to happen whenever possible. 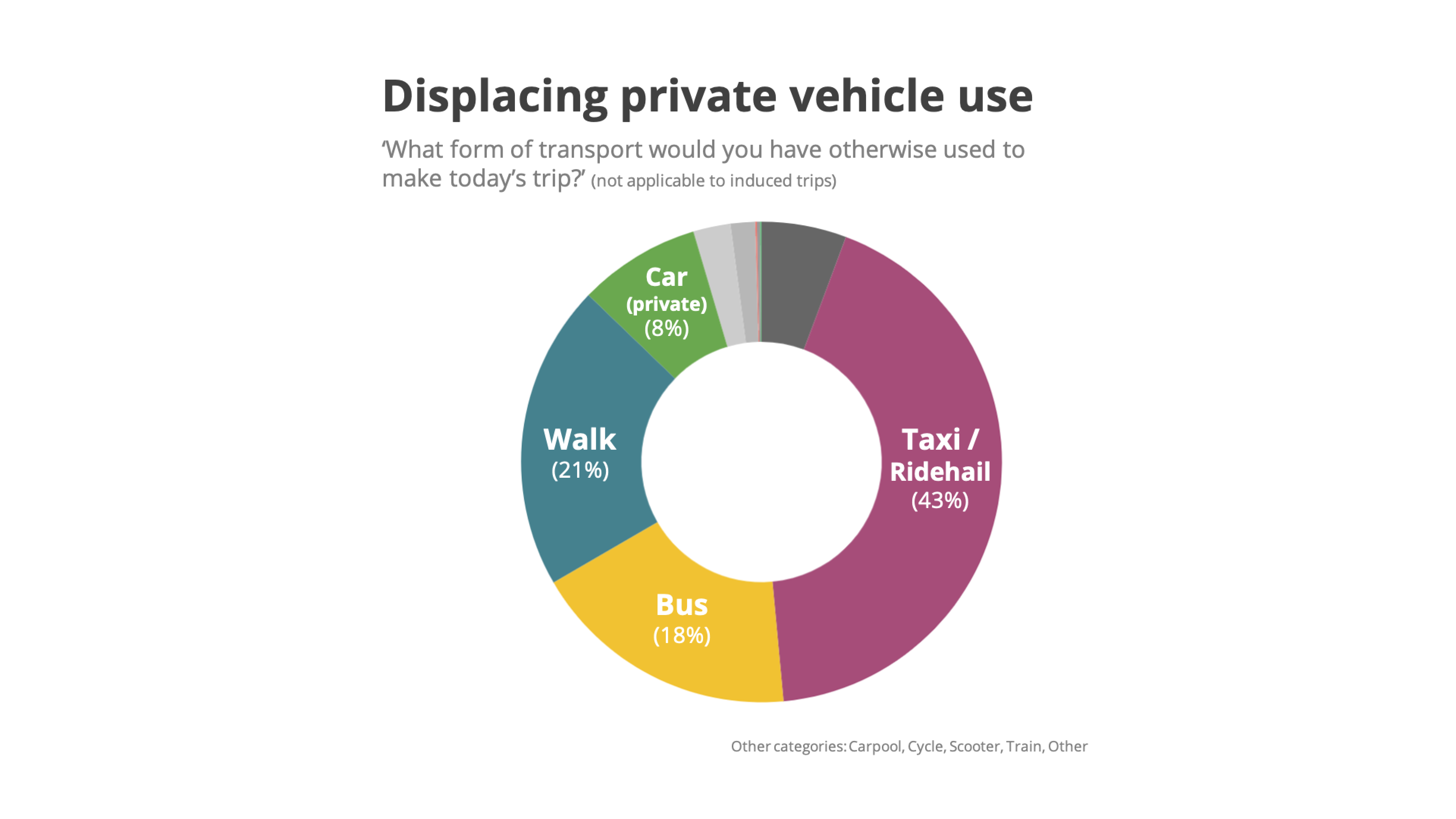 Nevertheless, many of the walking trips replaced by on-demand could have been unsafe for riders, particularly those taken at night. By disaggregating our data by gender, we spotted two important trends: first, women tend to replace walking trips far more often than men. And second, women increasingly replace walking trips as the day wears on, whereas this effect isn’t seen for men.

These patterns are not surprising given that women are far less likely to feel safe when walking at night than men. The availability of safer on-demand transit is a huge win for female riders in these situations.

There’s plenty more to unpack on the topic of gender and travel, so we will soon be publishing a more in-depth blog post about this. Keep your eyes peeled! 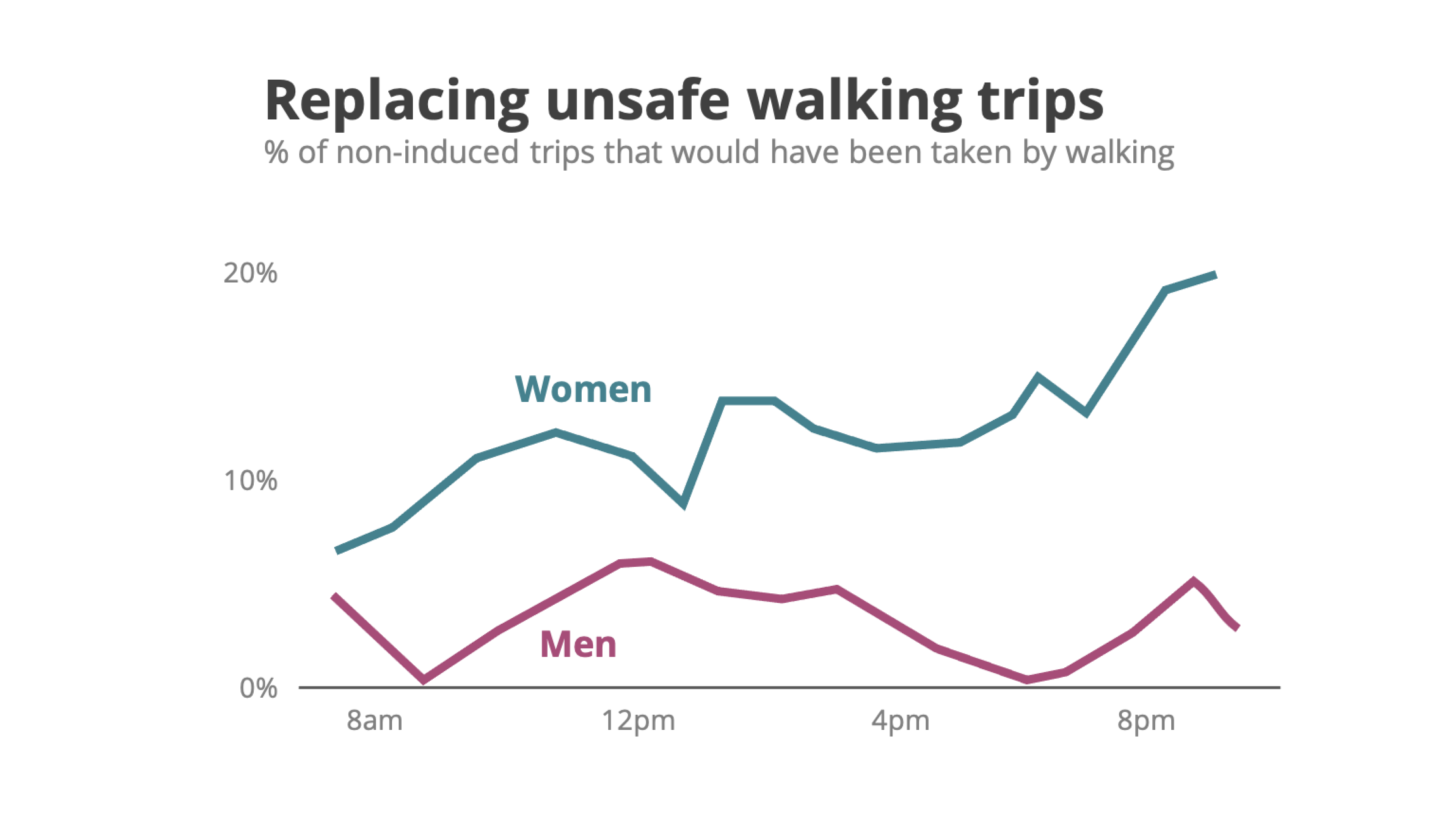 On-demand microtransit is a convenient alternative to mass transit

Whenever an on-demand service is launched in a new location, the theory goes that its flexibility and convenience will lead to a vastly improved travel experience relative to fixed-route transit. That’s presumably why 18% of our riders shifted from using fixed-route buses to on-demand microtransit.

But quantifying the savings from switching to on-demand can be difficult.

Using an open-source routing algorithm and GTFS data for our service zones, we compared each survey respondent’s on-demand trip with the equivalent trip they would have made if they only had access to mass transit. This allowed us to estimate the theoretical ‘alternative travel time’ using fixed-line buses, subways or trains, which includes any walking and waiting between transit stops.

We found that the majority on-demand trips (52%) either would not have been possible at all with mass transit, leaving the traveller with no option but to walk, or to board mass transit two or more times. On-demand therefore saves riders time thanks to reduced walking between stops and lower waits for multiple boardings, and it also reduces stress and physical discomfort for riders with mobility difficulties. 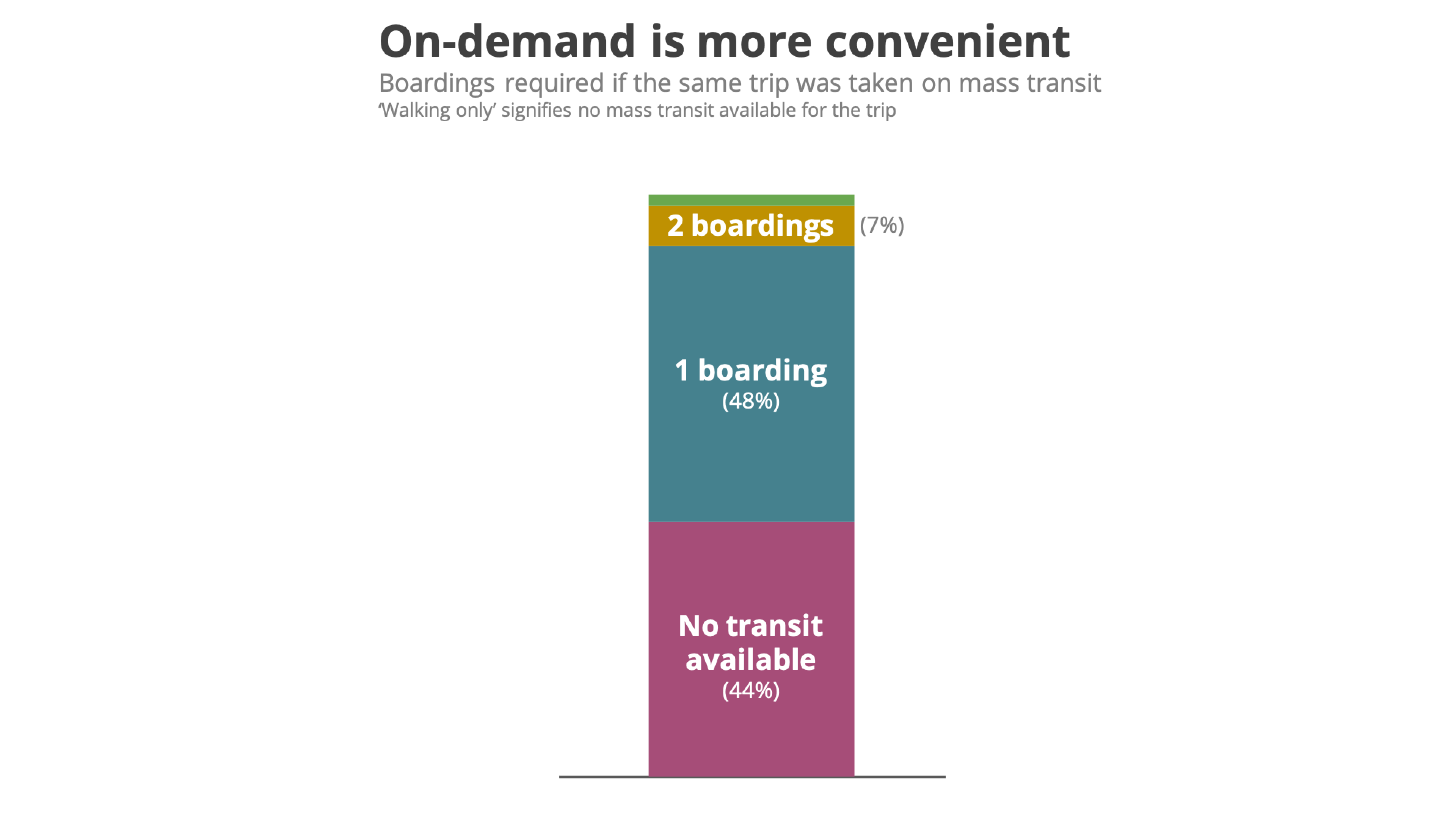 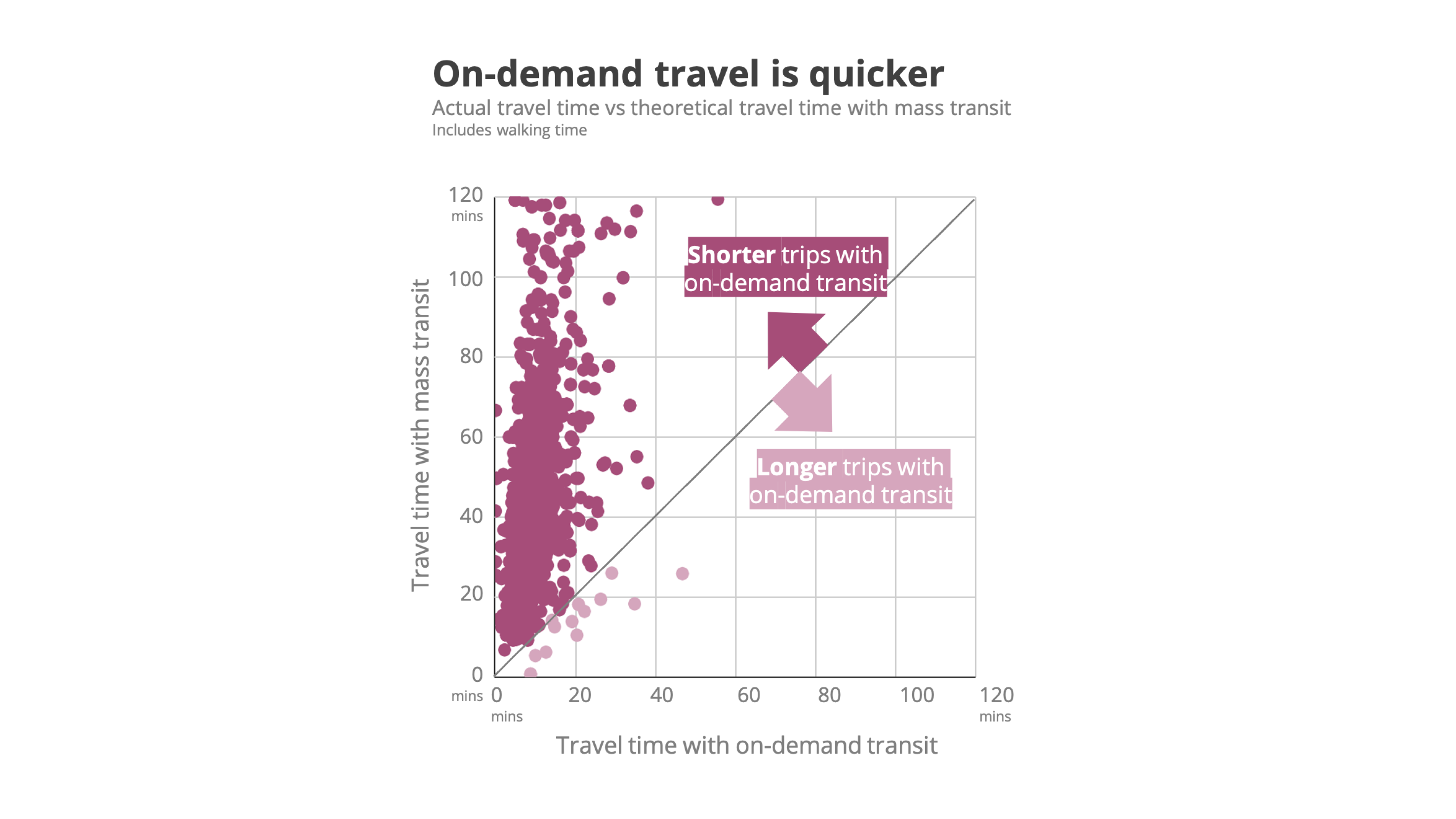 Of course, in many dense urban neighborhoods, bus rapid transit routes will provide quicker travel for larger volumes of riders: that is the sweet spot for mass transit. But there is no doubt that on-demand travel is quicker, and far more convenient, in the zones currently powered by Spare.

These stark findings are a testament to the ways in which transit planners at our partner agencies have designed their services. Empowered by Spare’s technology, transit planners have deployed on-demand wisely to fill specific niches, rather than indiscriminately replacing efficient fixed-route buses.

Travel surveys have had a bad reputation in the past, and understandably. They’re cumbersome, expensive, and there is no guarantee the data they generate is a true representation of how people travel.

But in the era of digital mobility platforms and rider apps, we predict the humble travel survey will make a comeback. Matching riders’ actual travel patterns with their socioeconomic profiles and stated intentions, all the while maintaining anonymity and privacy, is the holy grail for transit planners. At Spare, we’re excited to empower this data journey.

As we increasingly get excited about the advent of ‘big data’ in transportation, it’s important to remember that big data is, ultimately, political. It’s about asking insightful questions, but it’s also about acting on the answers. That process begins by collecting the right data.

Surveys can be laced with bias if we’re not careful, so we mitigated against it wherever possible. For example, not everyone books trips through an app, so we worked with partner agencies to conduct some surveys by phone. Ultimately though, we could only collect data from riders who chose to answer, so the usual caveats around bias apply.

And last but not least: privacy. Since respondents shared private information in our surveys, we never linked survey responses to individual Rider Identification numbers in our database, nor their addresses or names. This allowed us to maintain user privacy while collecting meaningful insights at the population level.