Flipping Transit on Its Head: Part I

In many parts of the world, fixed route transit is in dire straits. We propose a radical new idea to reverse its decline: use microtransit data to smartly redesign fixed transit routes.

Fixed-route transit is facing stiff competition from more convenient mobility options. Microtransit is emerging as an ally to transit, but its positive impacts are too often constrained by existing infrastructure. Operating on the principle of ‘business as usual’, many transit agencies design bus routes on the basis of poor data or gut feeling, and rarely alter them as demand patterns change. So we propose a radical new idea: use microtransit to flip transit on its head.

Our idea is simple. Transit agencies should initially set up a system of interconnected microtransit shuttles, which are far more nimble than fixed-route buses, to gauge where demand actually exists for transit. By rapidly prototyping and collecting detailed data as they go, agencies can pinpoint exactly where fixed bus routes are required, and where they are not. Let us explain.

Crisis and opportunity in public transit

Fixed-route transit in the US is in dire straits. Public transit ridership fell in 31 of the 35 major metropolitan areas in 2017, including the seven cities that serve the majority of riders. In Los Angeles alone, bus ridership declined by 30% in the last decade, while ever-rising congestion costs the city almost $10 billion a year. Some claim the Golden Age of Transit in the US is long behind us. 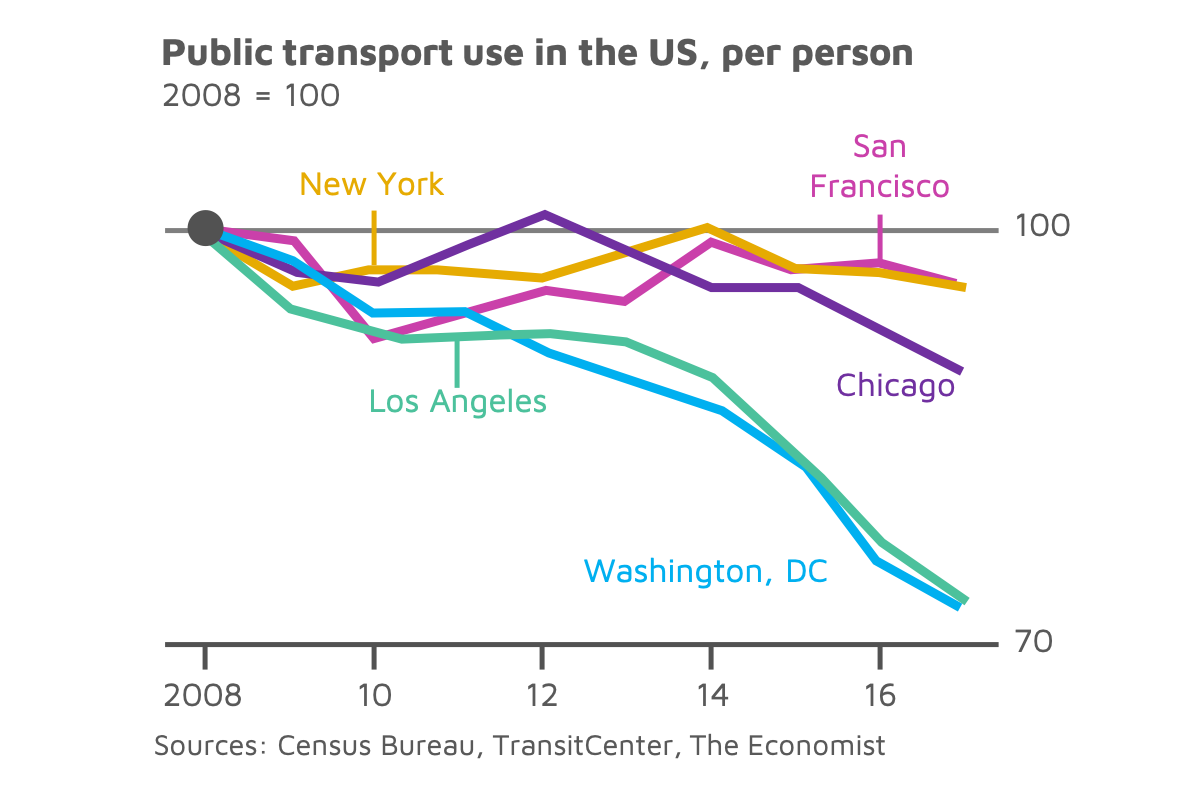 The root causes of this decline are tangled: rising car ownership, falling gas prices, changing populations and the boom in Transportation Network Companies (TNCs) like Lyft and Uber may all be to blame. At the same time, rapid improvements in smartphone technology, open-source mapping and cloud computing mean citizens expect ever more convenient and reliable mobility. So how can public transportation remain competitive in the 21st century?

In a bid to reverse their fortunes, transit operators are turning to the innovations with which TNCs originally disrupted the market. This has driven the adoption of new models for shared mobility, including microtransit. Microtransit software platforms such as Spare’s use advanced algorithms to offer a door-to-door service (like an Uber trip) that pools riders together to reduce costs and increase efficiency (like a bus). This makes microtransit one of the most affordable “first mile/last mile” solutions out there.

Microtransit projects are far more convenient to launch than fixed-route lines because they are cheaper, more flexible, and less constrained by stringent procurement and planning rules. However, politics, money and land-use issues mean that microtransit is rarely deployed to its full potential.

Microtransit should inform fixed routes, not the other way round

Fixed bus routes have often been designed on the basis of imprecise historical data, anecdotal evidence, or even gut feeling by planners. The underlying assumption is summarized in a celebrated quote from the film Field of Dreams:

‘If you build it, they will come.’

This means microtransit is usually squeezed into convenient (but often illogical) zones that fill the gaps left by poorly planned transit.

We think this is the wrong way to view the problem. Transit agencies should run microtransit to better understand rider needs, and to use that knowledge to redesign their fixed routes. By rapidly prototyping a transit system composed of several interconnected on-demand services, and continually monitoring its performance, planners would be encouraged to fail fast and iterate quickly.

The rich datasets collected by microtransit platforms can be used to pinpoint where demand exists for transit, as well as the types of trips undertaken by different population groups. This helps identify the best locations and timings for fixed bus routes, and to nudge riders to adapt to more rigid schedules if needed. In areas where the volume or reliability of demand are too low to run a fixed route, it might be wise to maintain a fully on-demand microtransit service.

Through rapid microtransit prototyping, agencies can begin to join the dots and design more effective fixed routes: this is the essence of flipping transit on its head. It transforms that Field of Dreams quote into a far smarter solution:

‘Build it where they come.’

What the future holds

As nimble microtransit providers increasingly partner with transit agencies, public transit is experiencing a facelift in terms of quality and coverage of service. For example, at Spare we are developing new products such as ‘Predicted Demand’, a cutting-edge tool that taps our huge database to generate ridership prediction models and anticipate demand in real-time. By their nature, our models tend to target times and locations that correspond to large movements of people: inbound commuter trains for instance, or the start and end of the school day.

Predicted Demand creates a situation where the transit agency and the rider ‘meet in the middle’. By dispatching vehicles in advance to meet demand, waiting times are reduced, connections to transit become seamless, and cost savings can be passed on to riders. At the same time, riders ‘give back’ to the system by occasionally waiting for more passengers to be pooled. Riders can even be nudged to change their behavior to suit the general efficiency of the system, in return for a more comfortable and convenient transportation experience.

With global urban passenger-miles due to double by 2050, and drivers already spending up to five workweeks a year stuck in traffic, it is crucial that car usage should be replaced by convenient, affordable and sustainable mobility options. By building microtransit into their urban planning strategies, cities and transit agencies have an opportunity to radically shift the needle and reverse the fortunes of public transit.

To illustrate how 'flipping transit on its head' works in reality, we explore a huge dataset from one of the largest microtransit services in North America. Read Part II of this blog series to find out more!