Microtransit, pandemic and protests: A story of resilience

The shocks of the COVID-19 crisis and the BLM protests have been testing for the transit industry. By digging into our ridership data from around the world, we find that microtransit services have bounced back quicker than mass transit. 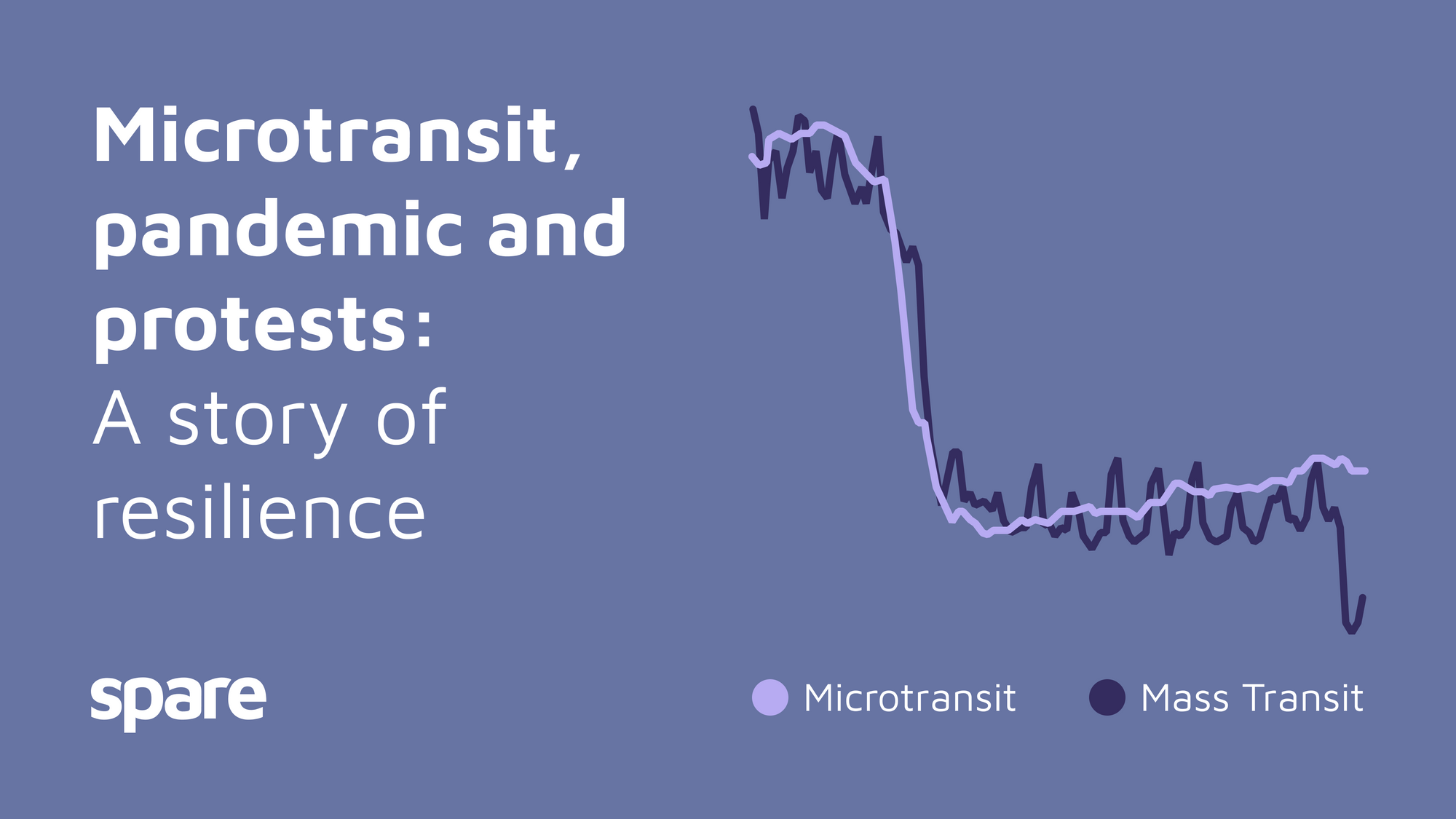 First the COVID-19 crisis, and now the Black Lives Matter (BLM) protests. We are living through a period of dramatic flux.

Both the pandemic and the protests have highlighted, among other things, the failings of public transit in providing fair and equitable access to opportunity. Transit was supposed to be a great equalizer; instead, it has failed those who rely on it most.

At Spare, we see this as a chance to create real change in an industry that affects millions of lives every day. We argue there is now widespread impetus to rethink our relationship with transit. That’s why we’re working with transit agencies all over the world to combine on-demand technology with fleets of smaller vehicles – an approach known as microtransit– to better respond to the needs of all riders, especially in marginalized communities.

At the heart of all this is the idea of resilience, which can be defined as the ability to bounce back from difficulties. We consider a resilient transportation system to be one that can meet all the needs of the public at any given time, even in the face of a big shock such as a pandemic or a protest. We’ve previously made the case for why microtransit is one of the most resilient transit models out there.

To better understand the impact that the recent shocks have had on our microtransit services, we (of course!) dug into some data. We previously showed how mass transit data can be used to infer that marginalized groups have a disproportionately greater risk of becoming infected by COVID-19. Could our microtransit data be put to good use too?

First, let’s examine the effect of the pandemic on our ridership. In the animated plot below, which aggregates data from all of our partner agencies, it is interesting to note that ridership in Asia dropped first in response to the pandemic. However, the decline in Europe and North America was much more dramatic.

In North America, our microtransit services rarely dipped below 50% of the expected ridership, which is a testament to their importance to local communities, as well as their perceived safety among riders. Ridership all over the world has been recovering since mid-April as rider confidence continues to improve, which suggests our services were resilient to the deep shock of the pandemic.

But how do these trends stack up against mass transit? We compared ridership data from some of our services in the US to data from the closest metropolitan area in Transit App’s coronavirus tracker. Some of our microtransit services are more suburban than the areas covered by mass transit, but it’s the best we can do with available data.

We chose to focus on two cities close to our hearts: Dallas, because it is home to one of our largest operations, and Minneapolis, because it has been central to the BLM protests and we provide a vital on-demand microtransit service in its suburbs.

In the figure below, microtransit ridership appears to be more resilient to COVID-19 than mass transit, because it began recovering sooner than mass transit despite a similar initial decline. Microtransit seems to have responded to the changing needs of riders more effectively, through more flexible travel times or making underserved destinations more accessible to riders. 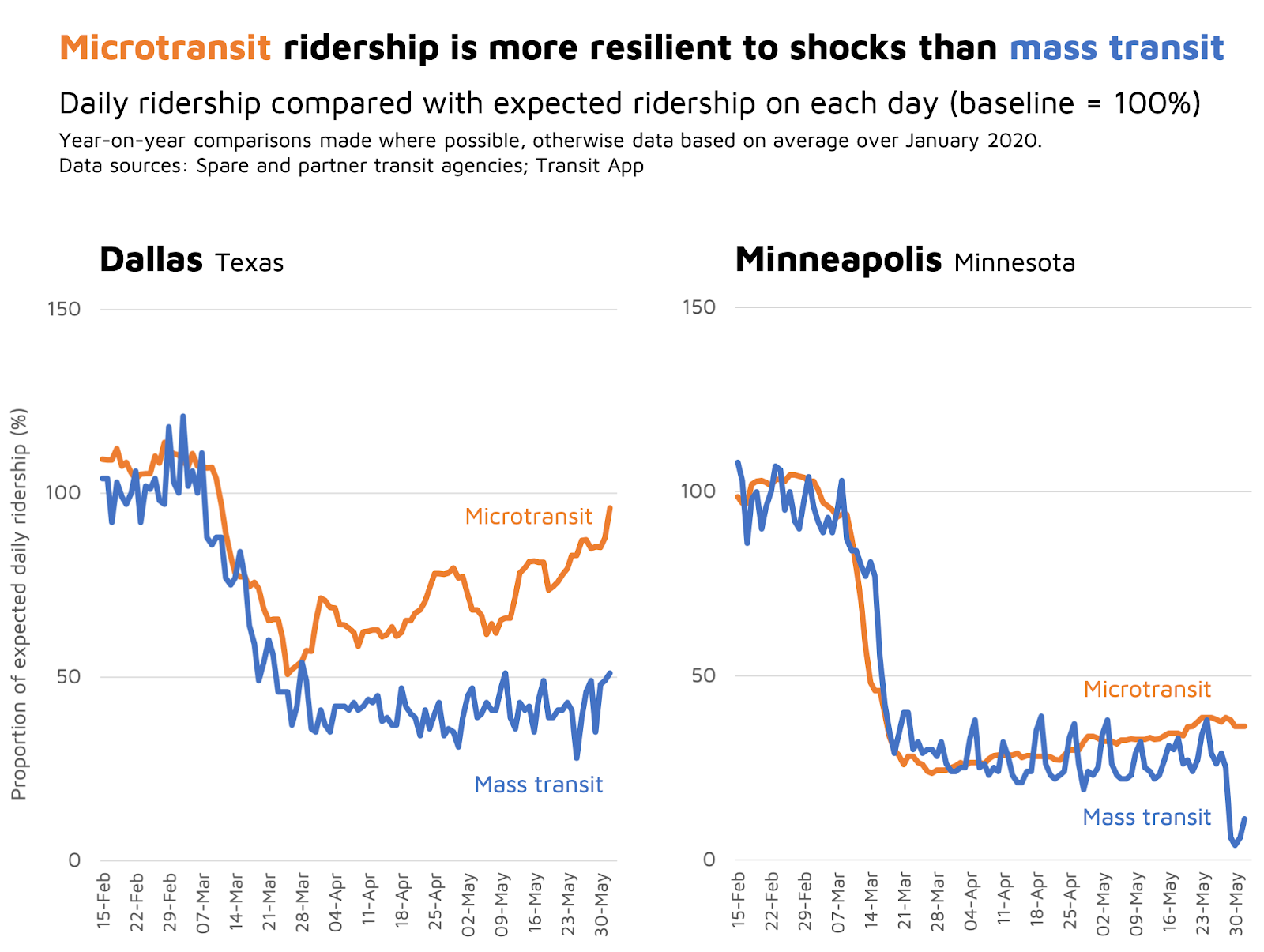 It’s also interesting to note the clear drop in mass transit ridership in Minneapolis last week, linked to Metro Transit’s shutdown during the unrest. In contrast, ridership continued to rise on our suburban microtransit service, demonstrating its resilience in the face of this very different type of shock.

To some extent, comparing the performance of separate microtransit and mass transit services negates the fact they serve different groups for different purposes. So it may be more informative to analyze the effect of directly swapping a fixed-route system to an on-demand one.

Conveniently, we have just such a case! Faced with dramatic ridership decline on their fixed-route services, one of our partners in Europe decided to take a bold step: scrap the fixed routes and switch them to a network of on-demand vehicles.

The graph below suggests the switch may have reversed the fortunes of the transit agency. There was an immediate uptick in ridership as soon as on-demand was introduced, probably because riders perceived it as a safer and more convenient option than public buses. The flexible and personalized nature of microtransit seems key for coaxing riders back to transit. 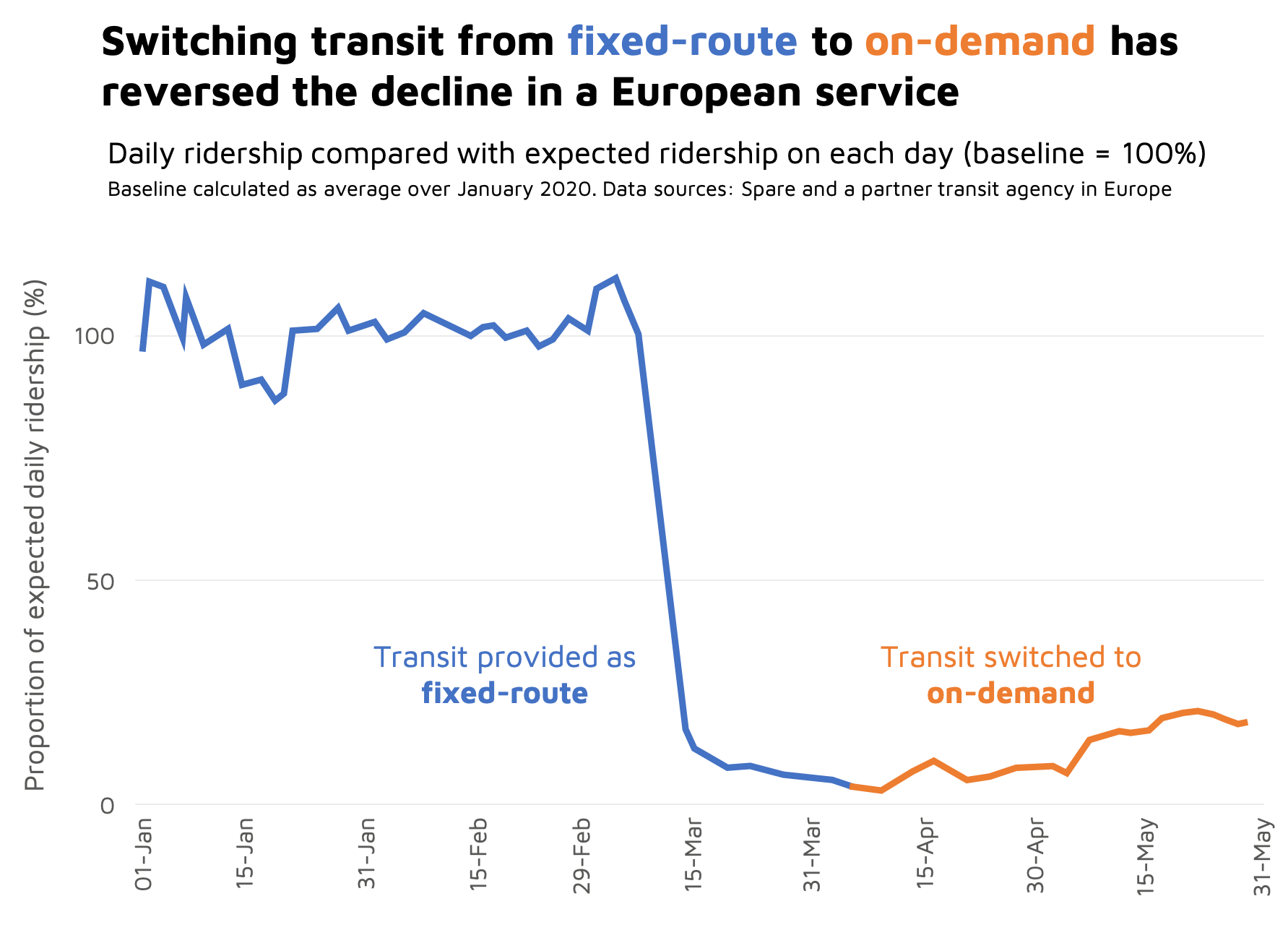 One last question remains: who is still riding microtransit? In a previous blog post, we discussed how COVID-19 has exposed the cracks between the ‘haves’ and ‘have-nots’ in the United States: those who can work from home or drive their cars, and those who have no choice but to commute to work on transit. For that analysis, we developed a ‘transit dependency score’, which combines several census measures to highlight populations that have little choice but to ride transit.

We calculated transit dependency scores for the suburbs of Minneapolis, and used the scores to characterize all the trips that were actually taken on our microtransit service there.

The data tell an interesting story. At the start of the pandemic in February and March, the share of trips starting or ending in transit-dependent areas increased by almost 10 percentage points, because – similarly to mass transit – microtransit was a lifeline connecting people to their jobs.

However, there is an important difference between mass transit and microtransit: the latter has the potential to provide much safer conditions for both riders and drivers. 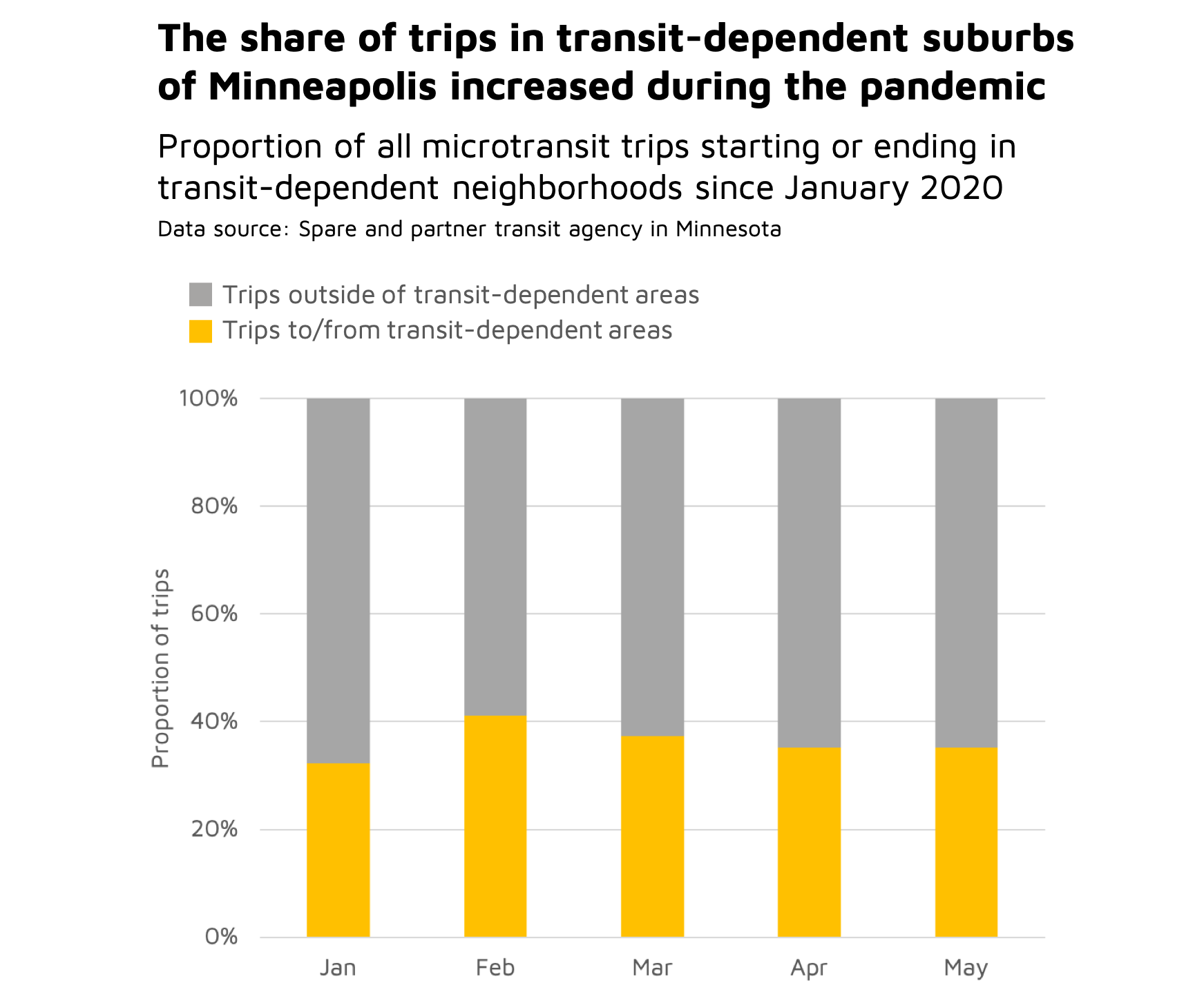 The dual shock of the COVID-19 crisis and the BLM protests has been testing for the transit industry. The initial decline in ridership was steep and difficult to manage, and the long-term effects on the financial viability of public transit are still uncertain. Nevertheless, microtransit has shone in these difficult times, providing crucial, flexible services that have bounced back quicker than mass transit. In a word, microtransit is resilient.

Microtransit is not a one-size-fits-all solution, however. It is not appropriate for all people at all times in all places. Many complementary strategies can help break down the barriers to transit for marginalized communities, and it is key to monitor the effectiveness of such measures through rigorous data collection and analysis.

Most importantly, we must ensure that all voices are heard loud and clear when designing, planning and operating public transit.