AnnouncementLearn how transit agencies can modernize their paratransit services in our upcoming webinar. Learn More →
Microtransit

Pilot projects give transit agencies a low-risk way to put on-demand transportation to the test. Here are some ways you can try out demand-responsive transit in your communities. 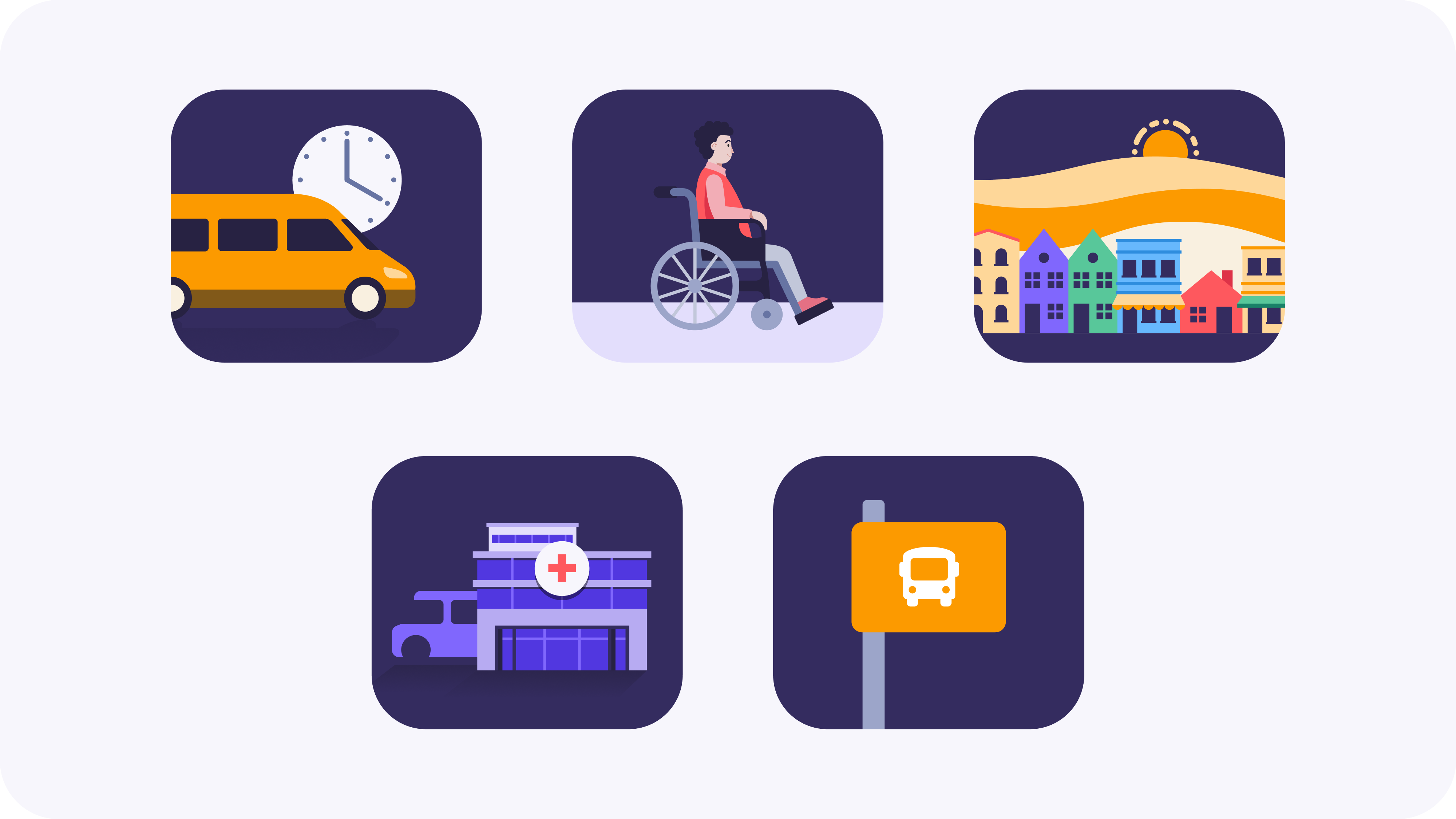 Transit planners know a lot goes into bus route planning and resource allocation. Deciding to add or subtract buses from a fixed-route network often means weighing rider needs against agency budgets, political expectations and available labor. It’s not an easy decision to make, and sometimes an even harder task to do. The same is true for introducing a completely new service like on demand transit.

While simulations can help with planning zones, allocating the right number of vehicles, predicting ridership and determining service costs for on demand transit, it's still not the real thing. So it’s completely understandable why launching a microtransit service can be seen as a big decision. But it doesn’t have to be and it certainly doesn’t have to be hard to do. 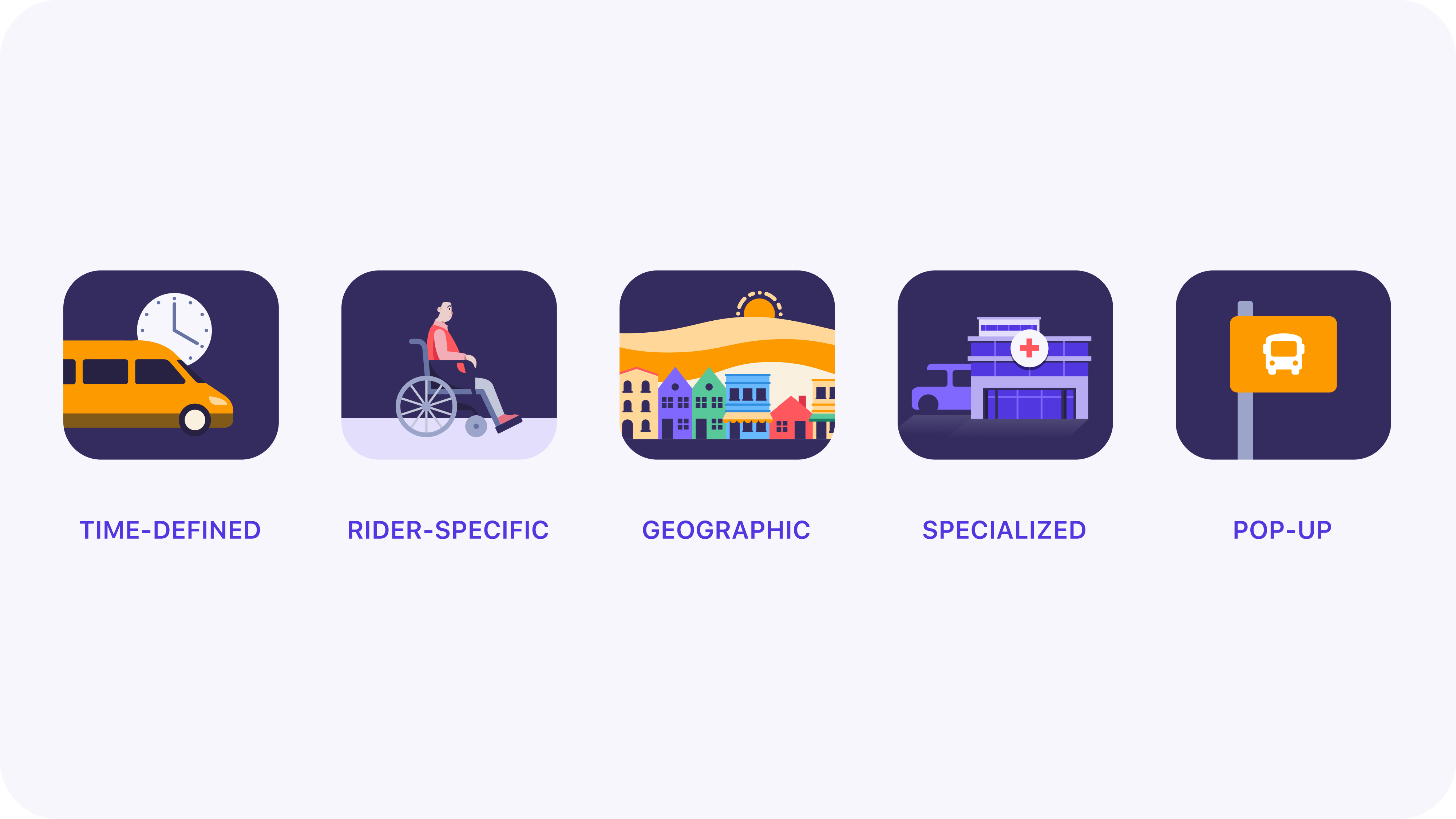 Beginning with a pilot

Microtransit service can be as mass or micro as necessary. In a pilot, agencies can test on-demand for very specific services and use the data collected to make decisions about future deployment without heavy investment. 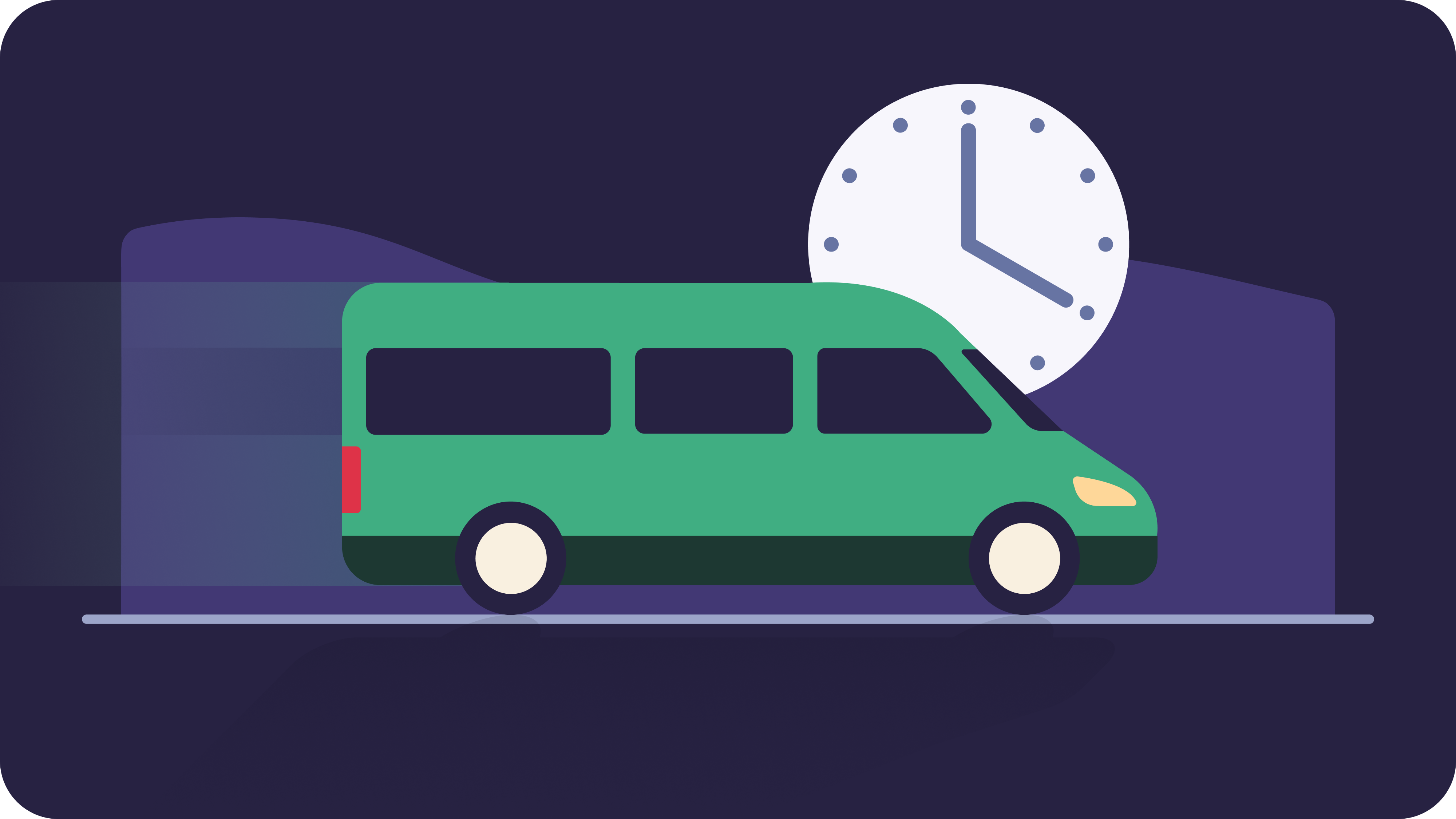 Microtransit for a specific time of day

In a fixed-route system, it’s normal that there are peak periods. These mirror the way we live. In some communities, where transit ridership is concentrated during rush hour for instance, it might not be financially viable to schedule night-time or early-morning buses. In some cases, transit agencies might opt not to run busses at all during those periods, leaving people who need transit with few options — think shift workers at a hospital.

On-demand microtransit can easily be introduced during these periods. Fleets that are used during the regular fixed-route hours can be repurposed during the off-hours on-demand service, minimizing the budget required for the pilot and helping to determine the right size vehicle needed for the service in the future.

Medicine Hat Transit, in Alberta used its existing wheelchair accessible bus fleet to launch its evening-only microtransit service MHTnow. After cutting evening timetables, the transit agency launched a pilot in the city’s north end as a way to maintain service for those who needed it. After the success of the pilot, MHT expanded on-demand services to other zones within the city and witnessed a 10% increase in weekday evening ridership. 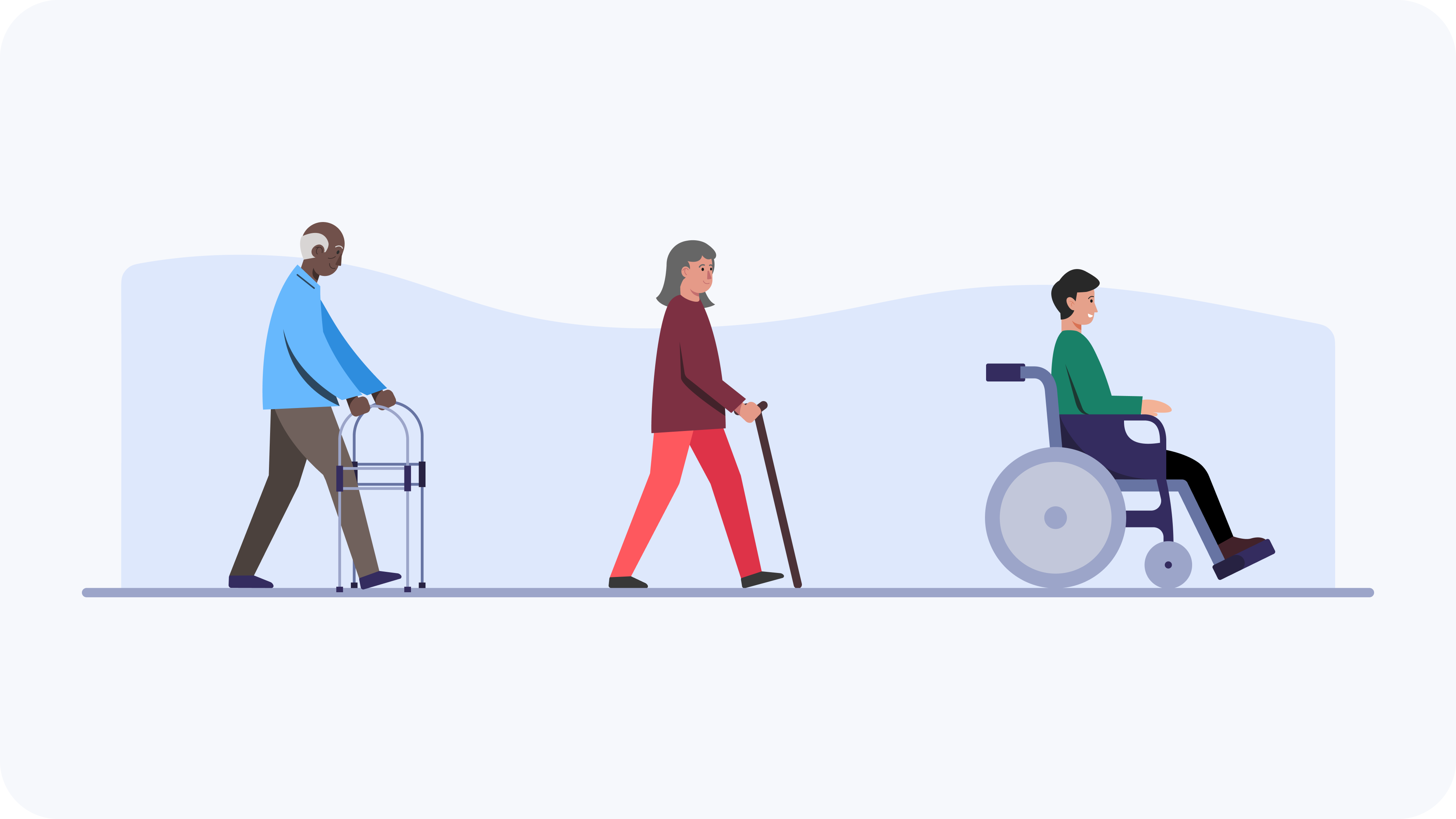 Microtransit for specific groups of people

Microtransit can be used to accommodate the needs of many rider groups. In the United States, transit agencies that offer scheduled ADA paratransit services for instance, could pilot an on-demand program that gives riders the opportunity to book transit in real-time, affording them greater flexibility in their day-to-day lives.

Or, transit agencies could try running on-demand microtransit in one school district for students during the morning and afternoon runs. This could be structured around a stop-to-stop model using regular size buses or shuttles, based on demand.

Another permutation on this idea is a senior-specific service. For instance, if we know that seniors like to visit the local mall in an area during the day or other key points of interest, transit agencies can pilot a microtransit service specifically for that drop-off point.

This approach is being employed in Norway. Ruter, Oslo’s public transit agency launched Ruter Aldersvennlig Transport (RAT), a shared door-to-door transportation service for people aged 67+ that connects them to services in the city. In Trondheim, transit agency AtB launched 67pluss as a pilot in three suburban neighbourhoods using three wheelchair-accessible vehicles. The service included 25 points of interest such as grocery stores, health services, churches and community centers and seniors could be picked up at home. The pilot was used to determine the impact of microtransit on the community, eventually leading AtB to expand on-demand to the general population. Accessibility is a major issue in public transit. Walking to the nearest stop and hopping on the next bus might be simple for people living in dense neighborhoods, but that’s not often the case for people in the suburbs or those living in rural areas. In many cases, even when people need to ride into the city or access services, they must rely on an individual vehicle at some point in their journey even if it’s to connect to a transit hub. Where does that leave people who cannot drive, don’t have a car or prefer not to drive? What about the person who arrives at the commuter train station to a full parking lot?

Microtransit as a first-last-mile solution is gaining traction. It allows transit agencies to offer efficient transportation between the home and the hub for people living in areas where a fixed-route bus is a money-losing proposition. In a pilot situation, transit agencies could identify several zones around a transit hub and offer on-demand to create better connections to the larger commuter network.

Transit providers can create incredibly bespoke experiences when it comes to zones, offering dedicated on-demand transit to places like the local ski center, within a university or corporate campus and for airport transfers. 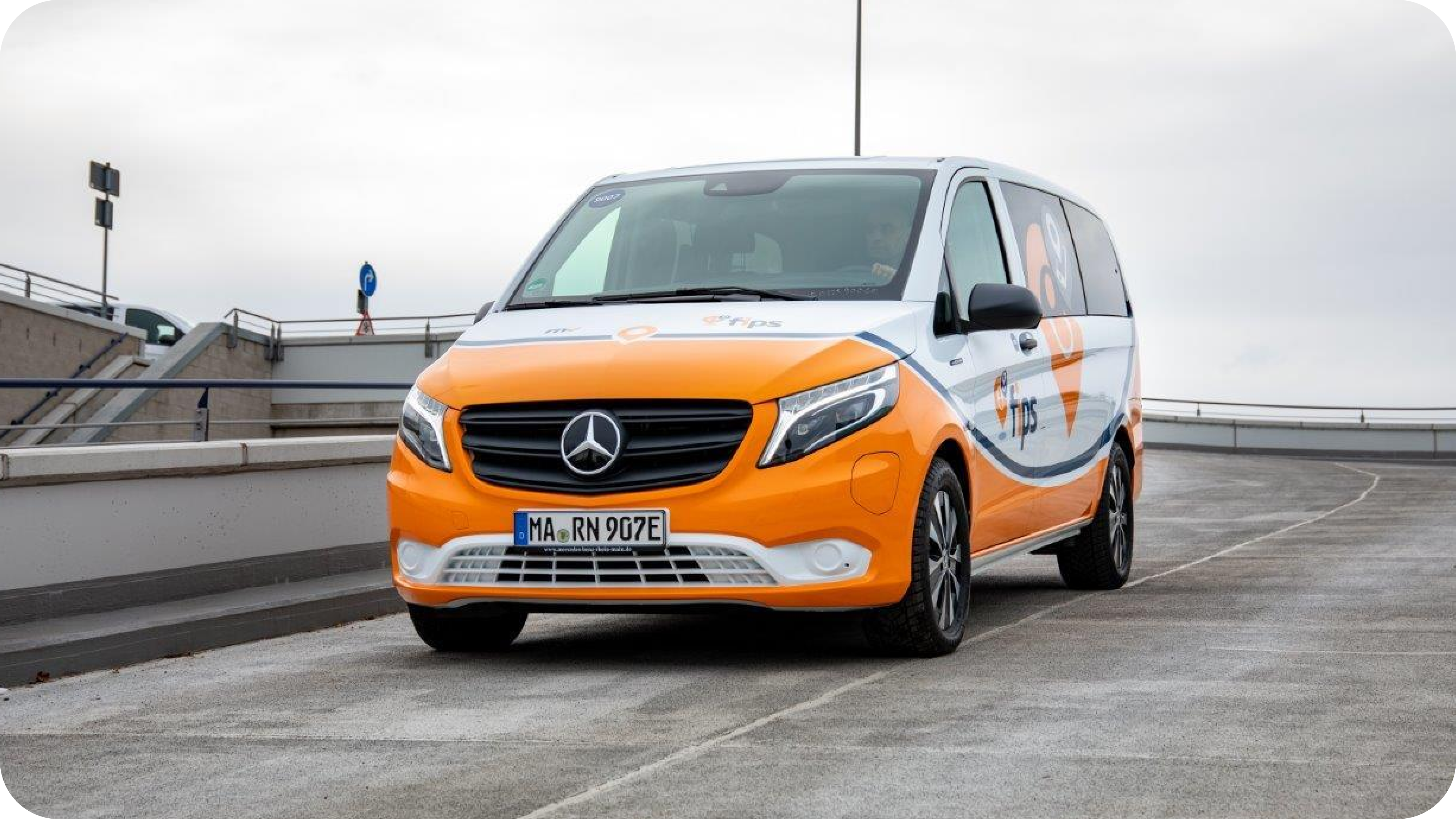 Many transit agencies already operate dial-a-ride and non-emergency medical transportation (NEMT). On-demand microtransit can replace quickly and easily automate these types of services through the addition of Spare’s software, improving their efficiency and passenger experience.

In Minnesota, many riders commute into the city of Minneapolis from a transit hub in Eden Prairie. But the scale of urban sprawl means that fixed-route services cannot adequately cover all suburbs. Southwest Transit employs an on-demand microtransit service called Prime to tackle this challenge. Following its success, the transit agency launched Prime MD, an NEMT service that allows registered riders to take trips outside the main Prime zone for medical appointments. These trips are pooled, resulting in significant cost and efficiency gains. NEMT vehicles are also used to supplement the regular microtransit service during peak demand. There are times when transit agencies require additional service for such things as a festival or a massive sporting event. On-demand microtransit, especially a program that uses existing fleet and/or third-party transportation providers through trip brokering, means you can create a service to accommodate any ephemeral event or temporary situation in minutes.

Pop-up services are also proving to be a valuable tool in the fight against COVID-19. One of the major impediments to getting the vaccine is transportation, particularly for older and low-income populations that might not have access to a personal vehicle. Transit agencies are creating temporary on-demand services to ensure no one gets left behind.

In Germany, Rhine-Neckar Transport (rnv) in the Mannheim region teamed up with Spare to deploy a dedicated vaccination transportation service for the elderly that gets them to vaccine sites safely. The microtransit software allows rnv to limit the number of passengers on board, allowing for proper hygiene and physical distancing. Launched ahead of rnv’s general microtransit network, the pop-up service has an additional benefit: it’s giving riders time to familiarize themselves with the on-demand concept.

While the vaccination campaign is likely to last for a few months, once microtransit launches, rnv will be able to segment vaccination service from the regular one. In other words, only those eligible for vaccination rides will be able to book them. Once it is no longer needed, the resources dedicated to vaccine travel can simply be re-absorbed into the transit network and redeployed toward other services.

There’s a use case for you

Whether you are looking to operate a completely new service or replace existing fixed-routes that are underperforming, microtransit pilots can be a good way to try out different ideas without having to fully commit.

To find out how you can set up a complete and well-thought-out microtransit pilot in just a few days, drop us a line at [email protected].