Why is transit collapsing, and who’s losing out?

Your wealth, education and race determine your exposure to the COVID-19 virus on public transit. 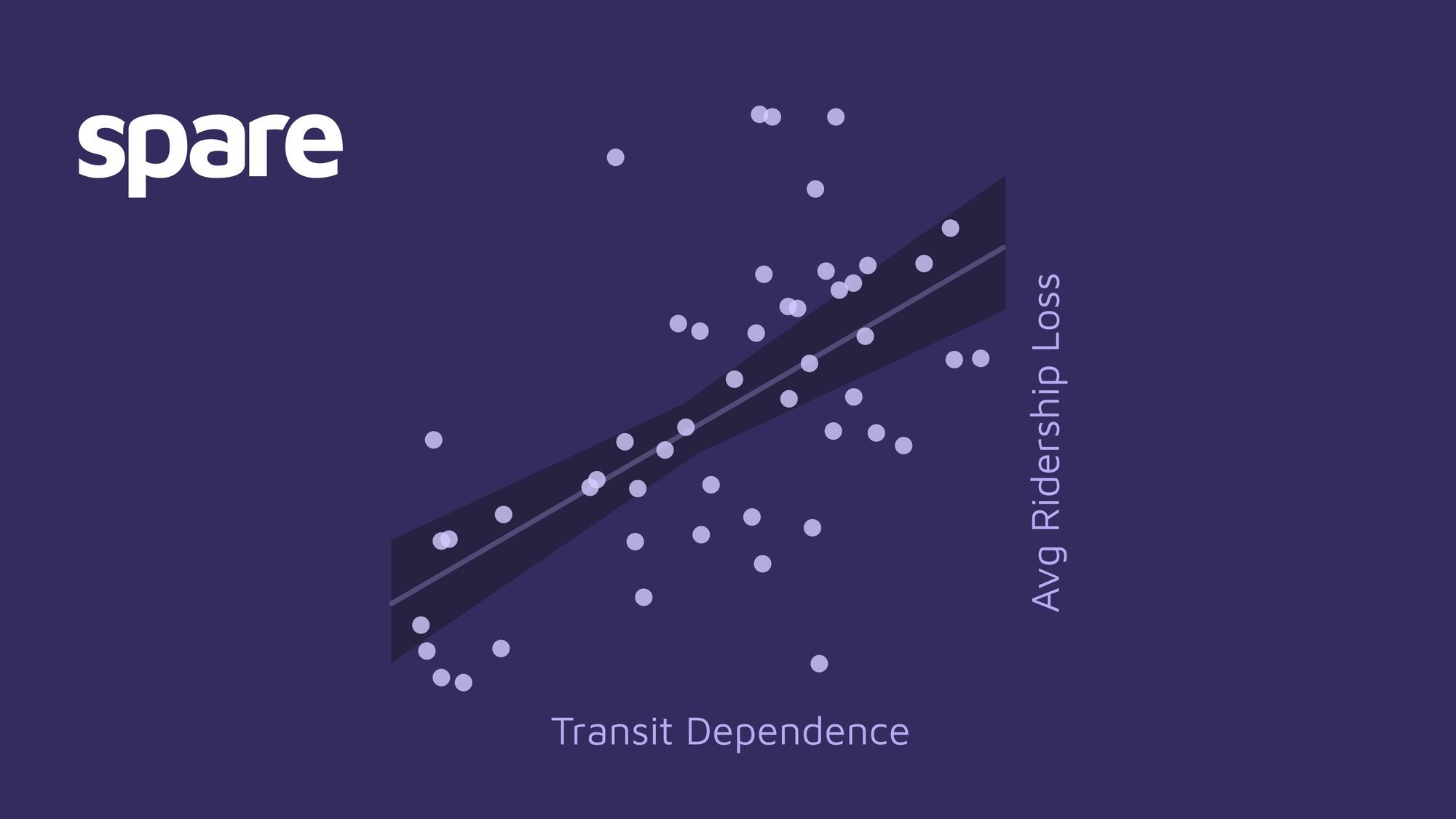 Transit ridership in many countries is laced with issues of inequality. Transit can either limit or broaden your opportunities to access jobs, goods and services, depending on who you are and where you live.

Areas with the poorest access to transit are often the most impoverished, meaning that those who are most dependent on transit are left high and dry. This is the great paradox of public transit: it should be a great equalizer, but more often than not it entrenches differences between cultures, races and wealth.

Since the World Health Organization declared the COVID-19 pandemic, transit ridership has been plummeting worldwide. In this blog post, we use ridership data to reveal the resulting cracks between the ‘haves’ and ‘have-nots’: between those who can work from home or drive their cars, and those who have no choice but to commute to work on transit. It’s a stark, but not unfamiliar, story of inequality mediated through transit.

For this analysis we used some really cool data published by our friends at the Transit App, which estimates the year-on-year drop in ridership from the number of users opening their app in each city. It’s not official ridership data, but it’s a pretty good proxy for now.

Only two weeks ago, transit was operating much like it had a year ago; today, cities in the US, Canada, Europe and even Australia – which lags a few weeks behind the crisis in the northern hemisphere – are on almost complete transit shutdown. 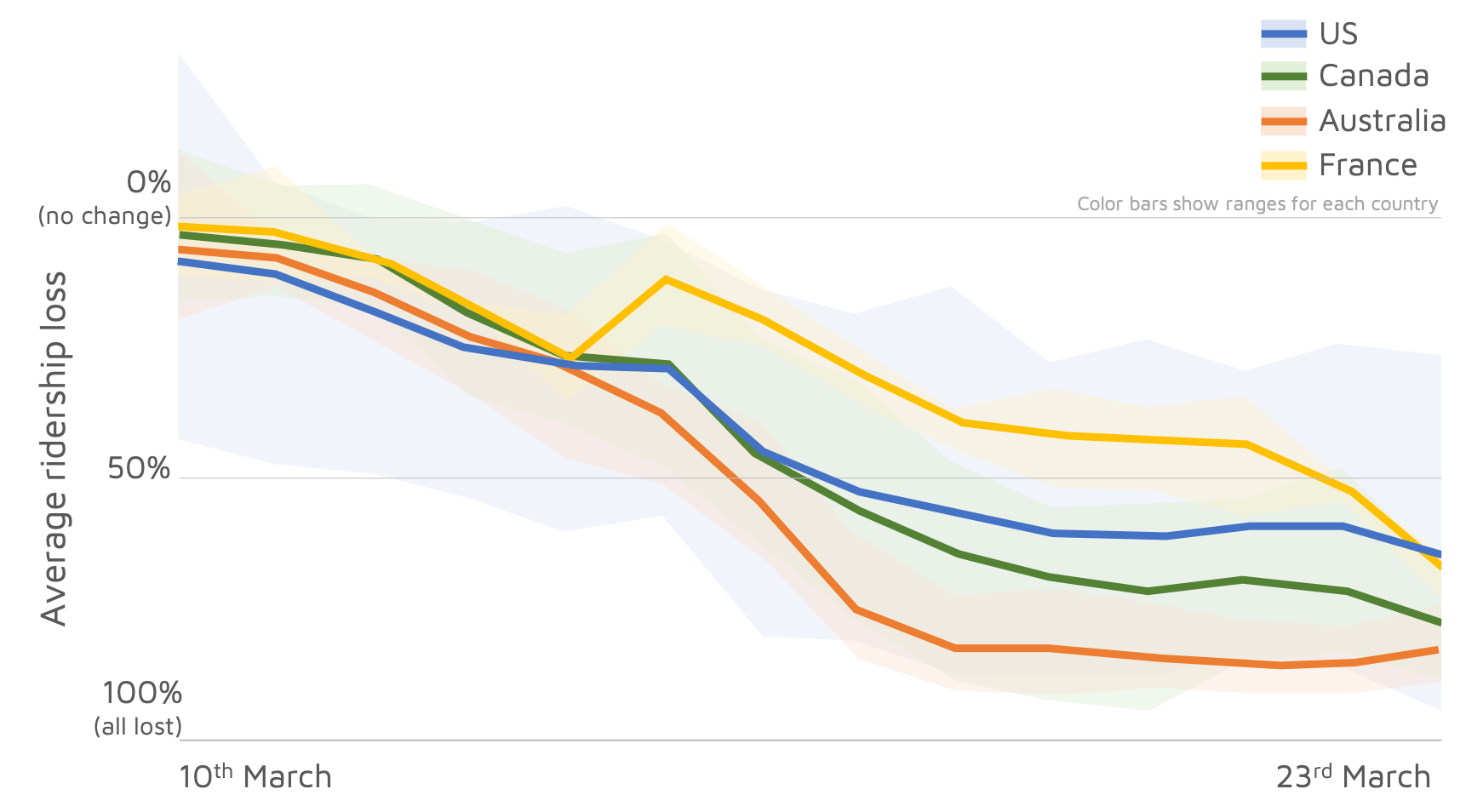 To dig deeper into the underlying drivers of these patterns, we zoomed into the data for the US, which is likely to become the next centre of the pandemic. We averaged the loss of ridership in each US city over the last week, and paired that with interesting socio-economic data from the 2018 census estimates. As you look through, remember the old adage, "correlation doesn't imply causation"! Just because two variables appear linked does not mean one causes the other.

Ridership has fallen fastest in cities where transit is popular

Cities where public transit is the most popular form of transportation (and where more households don’t own a vehicle) have seen the sharpest drops in ridership. This is due to authorities attempting to reduce social mixing by shutting down popular transit. Places where transit is less commonly used are more stable, because lower passenger numbers lead to lower risks of the disease spreading. But people who do use transit in these transit-unfriendly cities can still be highly dependent on transit as their only form of transport. 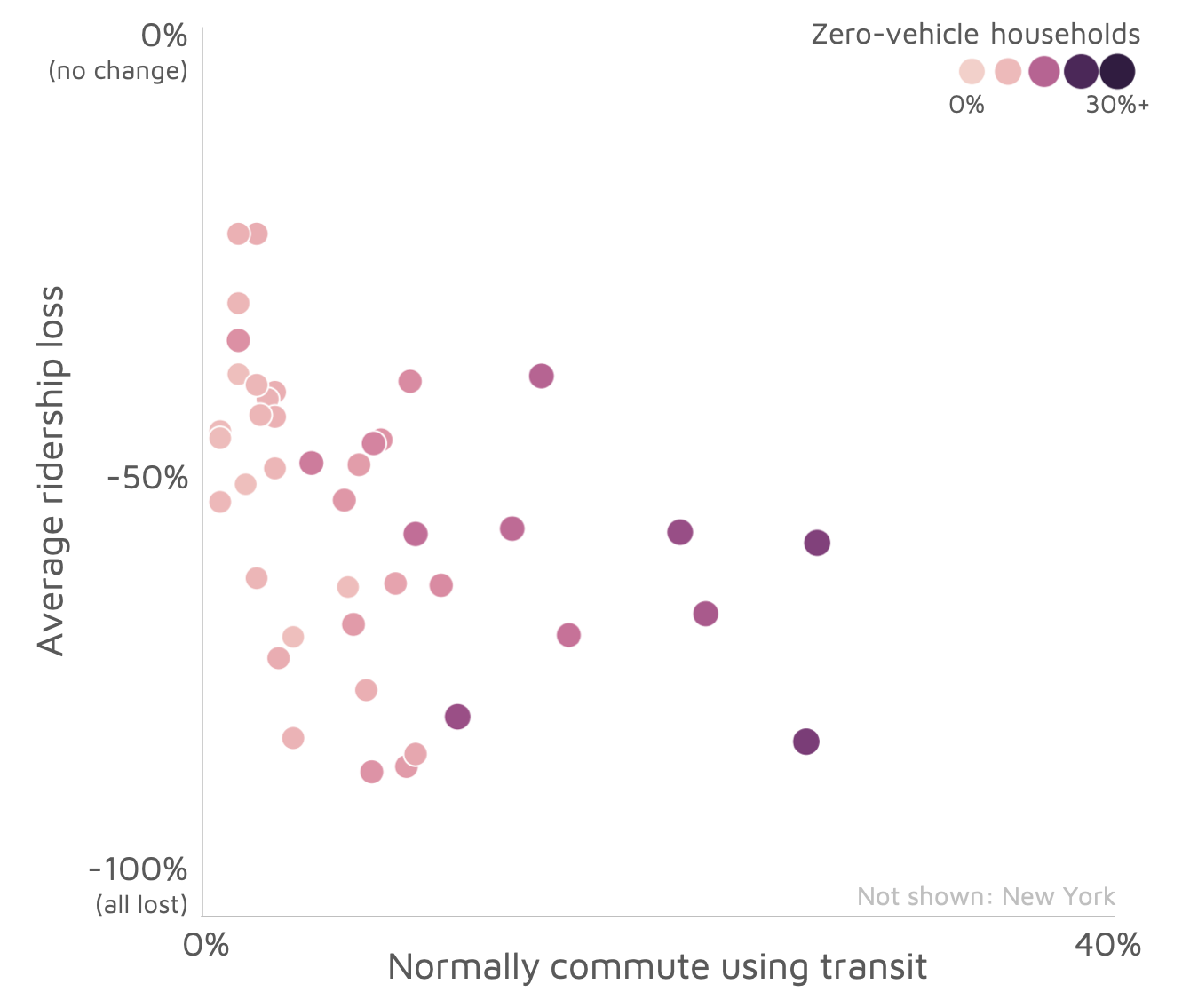 A person’s wealth is linked to their job, so richer cities have higher-skilled jobs that enable working from home. What’s more, wealthier people can afford to drive or take taxis instead of riding transit. Poorer residents tend to lack medical insurance – and since they have little choice but to ride transit, their risk of infection is very concerning for municipalities, which may soon have to deal with a high rate of uninsured patients moving through the healthcare system. 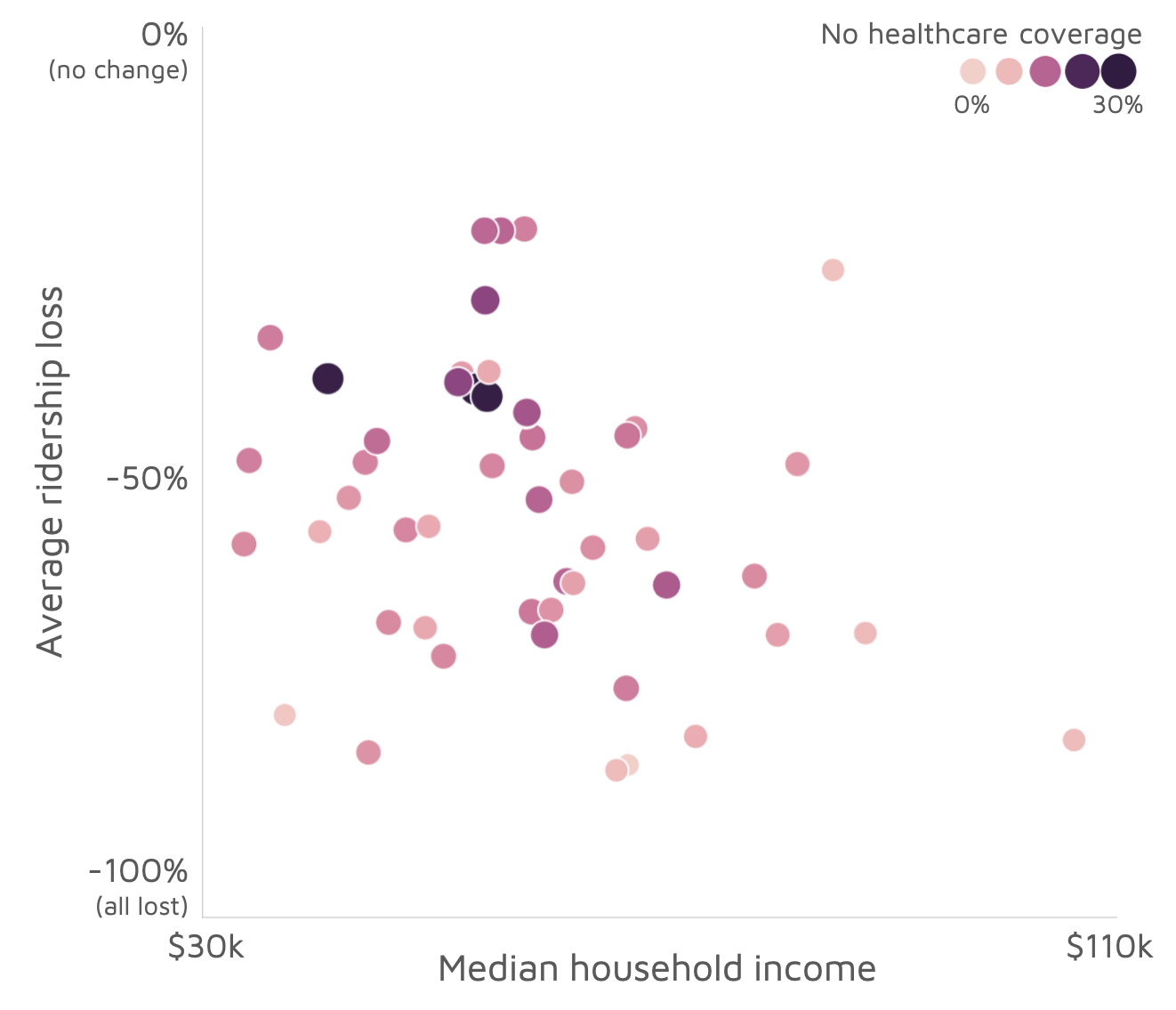 If you have a university degree, you can dodge transit if needed

It’s a similar story for university graduates, who tend to live in cities with higher-skilled jobs that are more likely to accommodate telecommuting. This is reflected in high computer ownership among graduates. Cities with higher proportions of well-paid jobs also tend to have better broadband infrastructure, which deepens the ‘digital divide’. In essence, a degree separates those who can work flexibly from those with no choice but to work on site. 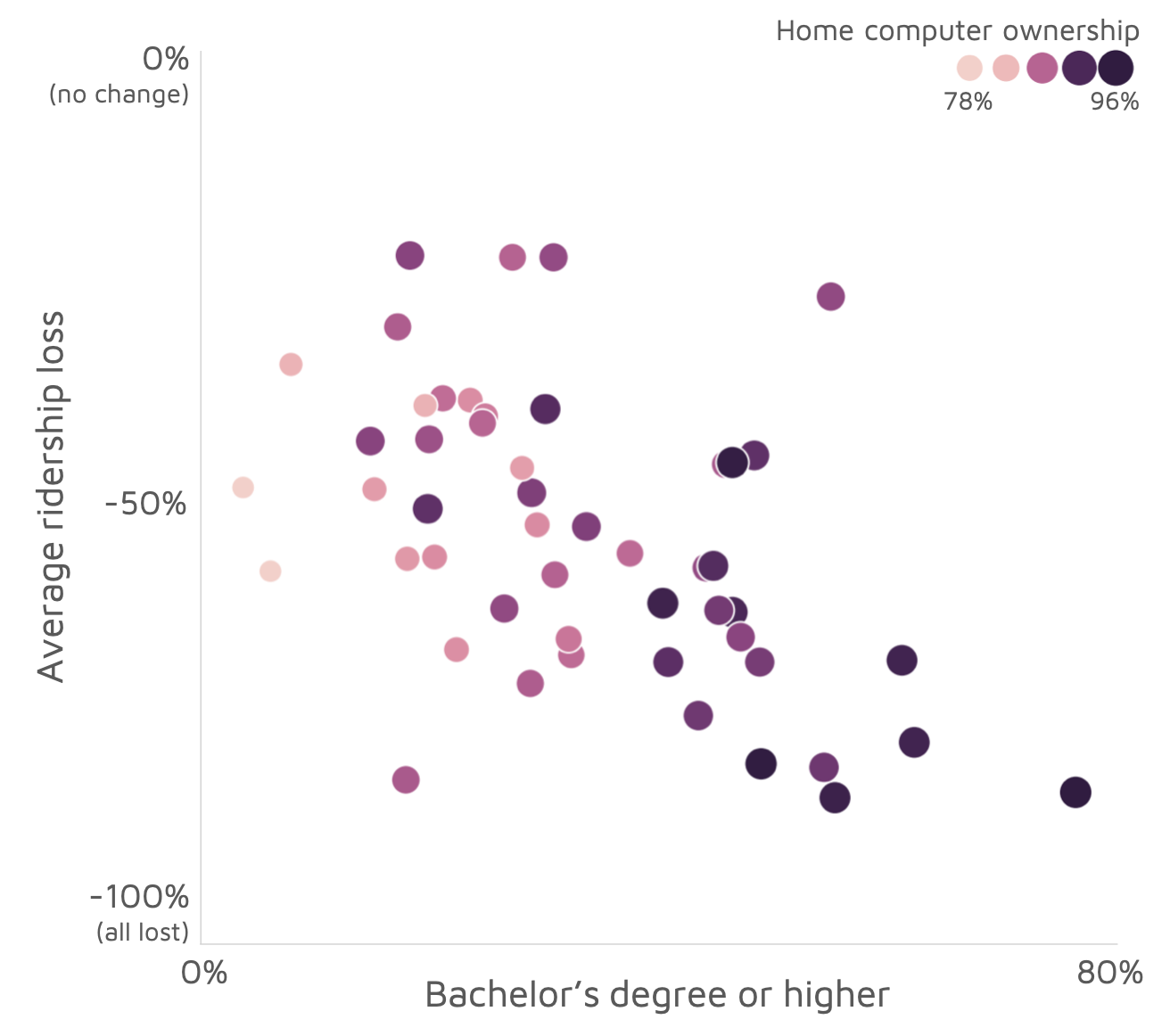 Female and minority entrepreneurship is linked to high transit dependence 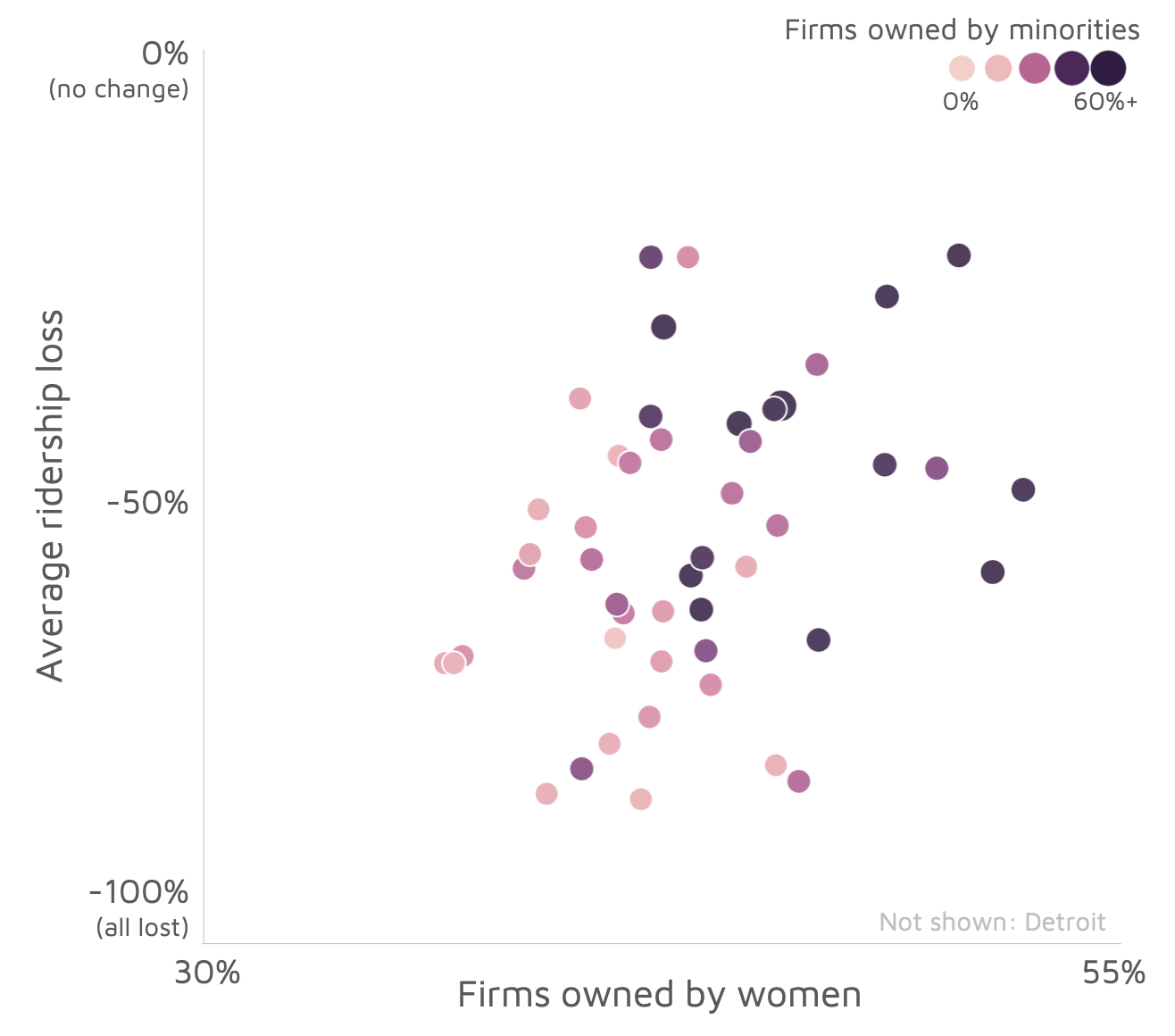 Cultural diversity may be a sign of greater workplace flexibility

Places that have experienced big influxes of foreign-born people in the last 5 years – and are therefore home to more languages – have more digitally-enabled economies. Immigrants to culturally diverse cities may have also brought wealth and job skills enabling them to avoid transit. 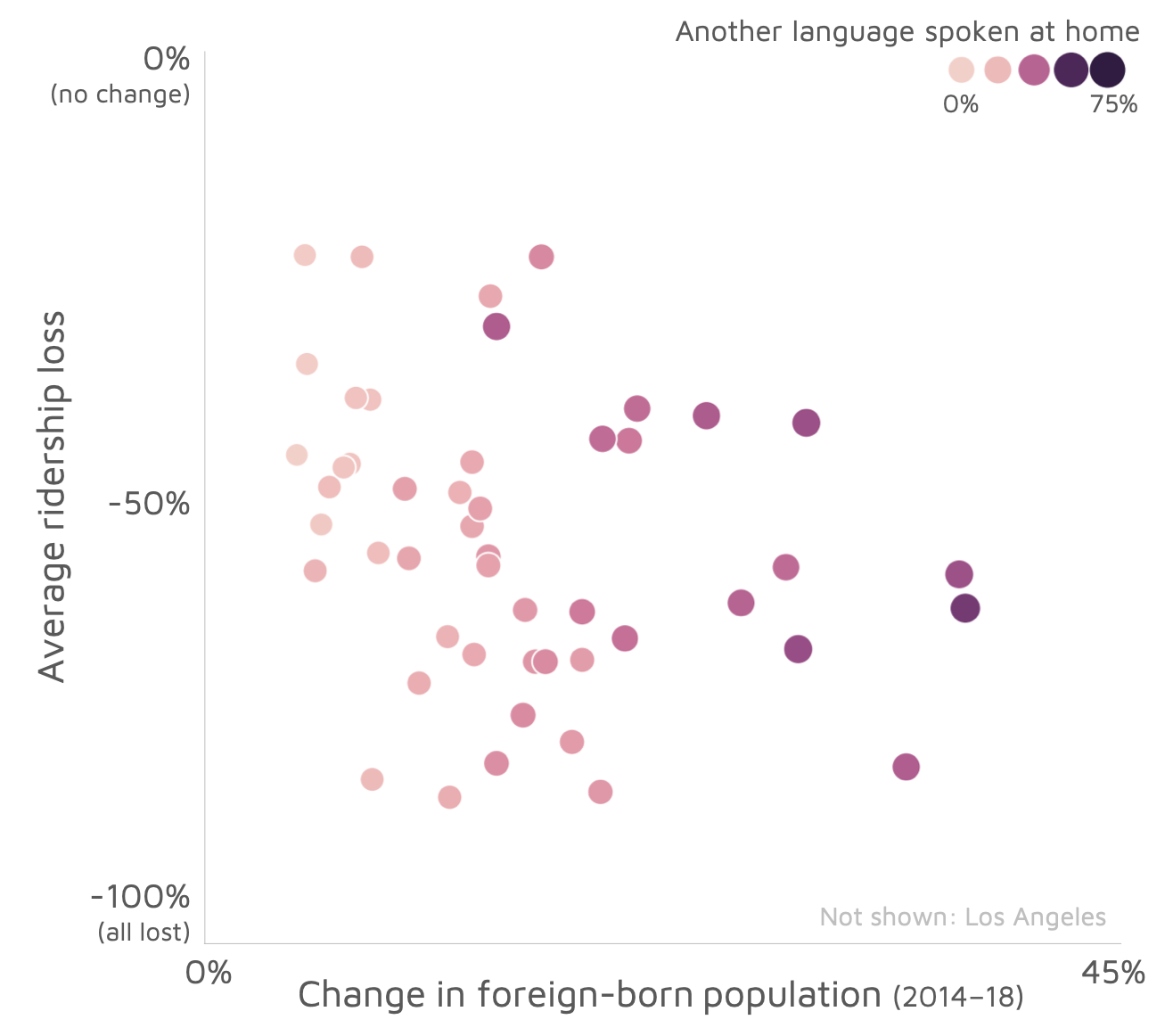 Cities where ridership has dropped most have low proportions of Black/African American residents, and conversely a large White population. This reveals the pandemic to be an equity issue: since many African Americans continue to ride transit for their commute, they may be at greater risk of contracting COVID-19. 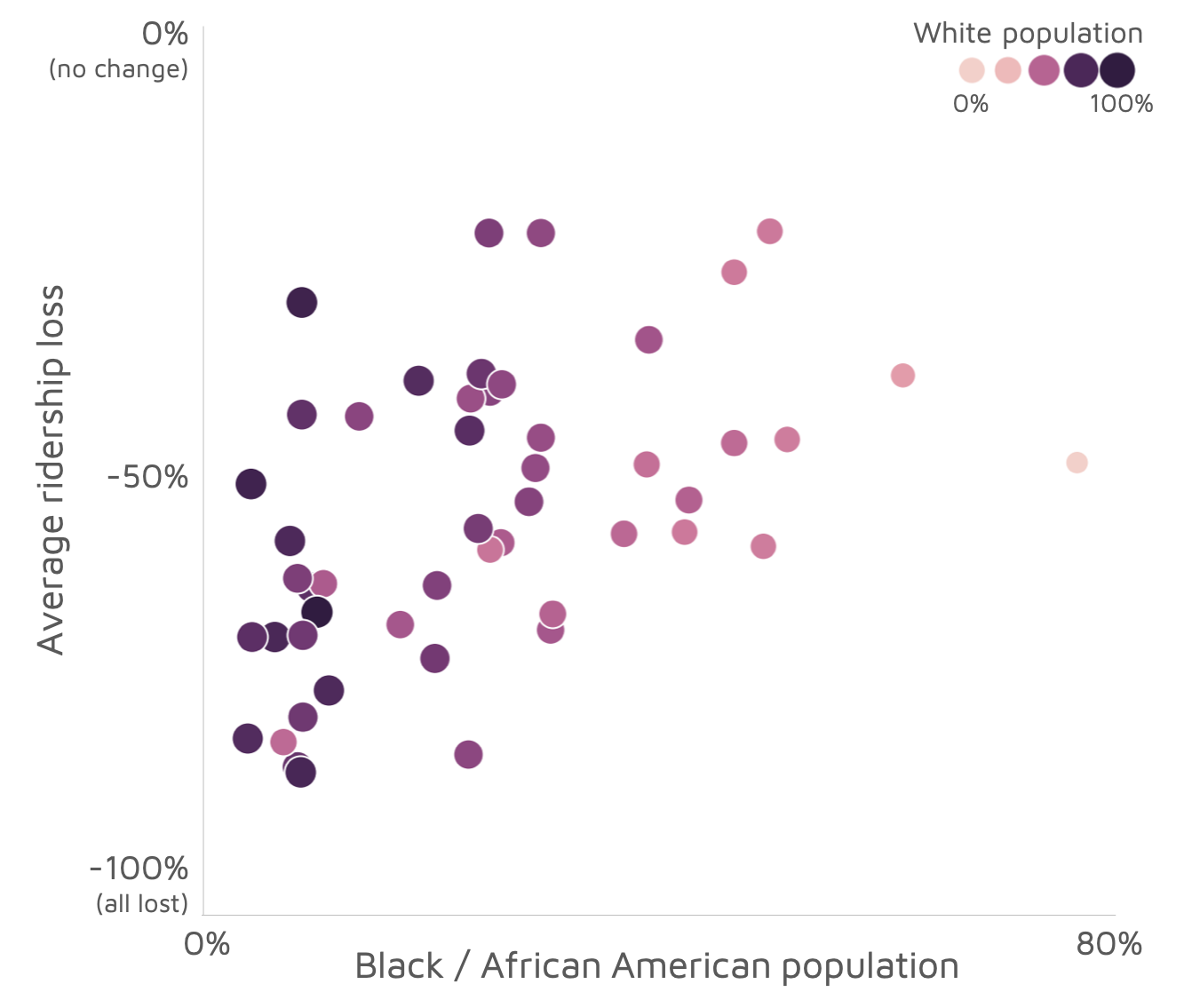 We combined several census measures into a ‘transit dependence score’, which is different to actual transit usage. While transit usage is high in cities with good infrastructure and service investment, our score highlights populations that have no choice but to ride transit – for instance, because they don’t own a car, or because they have low-skilled jobs unsuited to telecommuting.

We see that cities who are home to many transit-dependent residents have seen the smallest drops in ridership. While this seems reassuring at first glance, it also suggests that vulnerable people are at greater risk of contracting COVID-19, since they are being regularly exposed to others as they continue to ride transit. 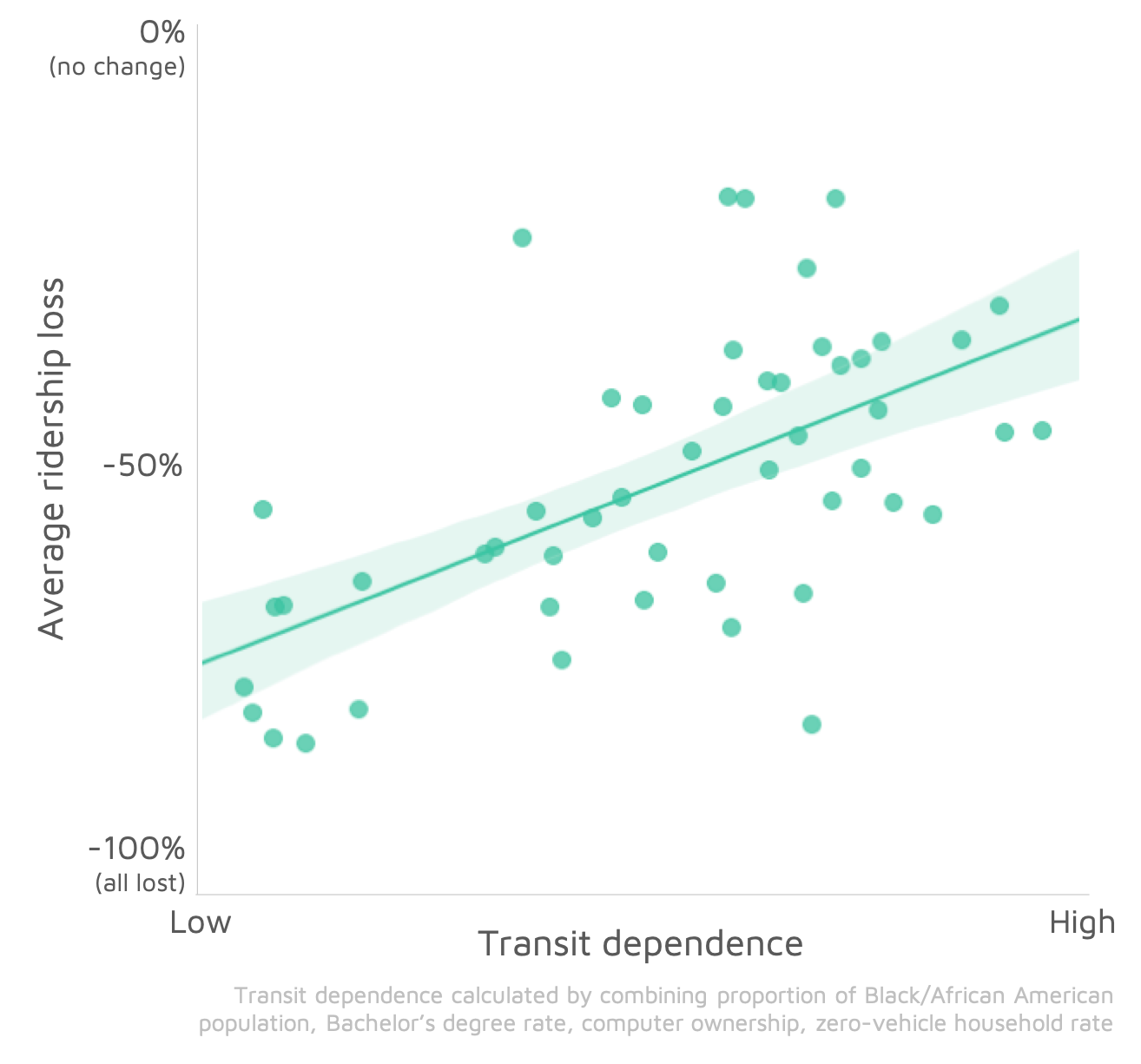 So what does this mean for transit agencies?

Transit ridership is to continue dropping all over the world. This will undoubtedly hit transit providers’ bottom lines, but it will also impact the ability of those most dependent on transit to get around, from shopping for food to accessing healthcare.

The deep inequalities in transit will not be eliminated overnight, but transit agencies can help mitigate the risk of exposure among their most vulnerable riders. Transit must remain a safe option for people seeking to access essential services, so a complete shutdown of all services is not an ideal solution.

Instead, cities – especially those whose citizens are highly transit-dependent (see the list below) – should rapidly shift to transit networks that blend existing fixed routes with on-demand microtransit. By running such hybrid networks at limited capacity, social distancing can be maintained while providing convenient and affordable transportation to those who need it most.

As we outlined in a previous blog post, we discussed how combining microtransit with fixed-route buses can provide safer, more resilient transit that can be segmented by risk group and transportation needs. It also provides an opportunity to nudge user behaviour and trace contact between riders.

Microtransit has hugely positive effects for society and transit agencies, including reduced emissions, better social cohesion and big cost savings. As the world continues to grapple with this unprecedented global health emergency, the widespread adoption of microtransit will also become a powerful tool for redressing inequality across our cities.

If you need any rapid response support, we at Spare would be glad to provide help. Feel free to reach out directly to us at [email protected]. We’re here to help you. 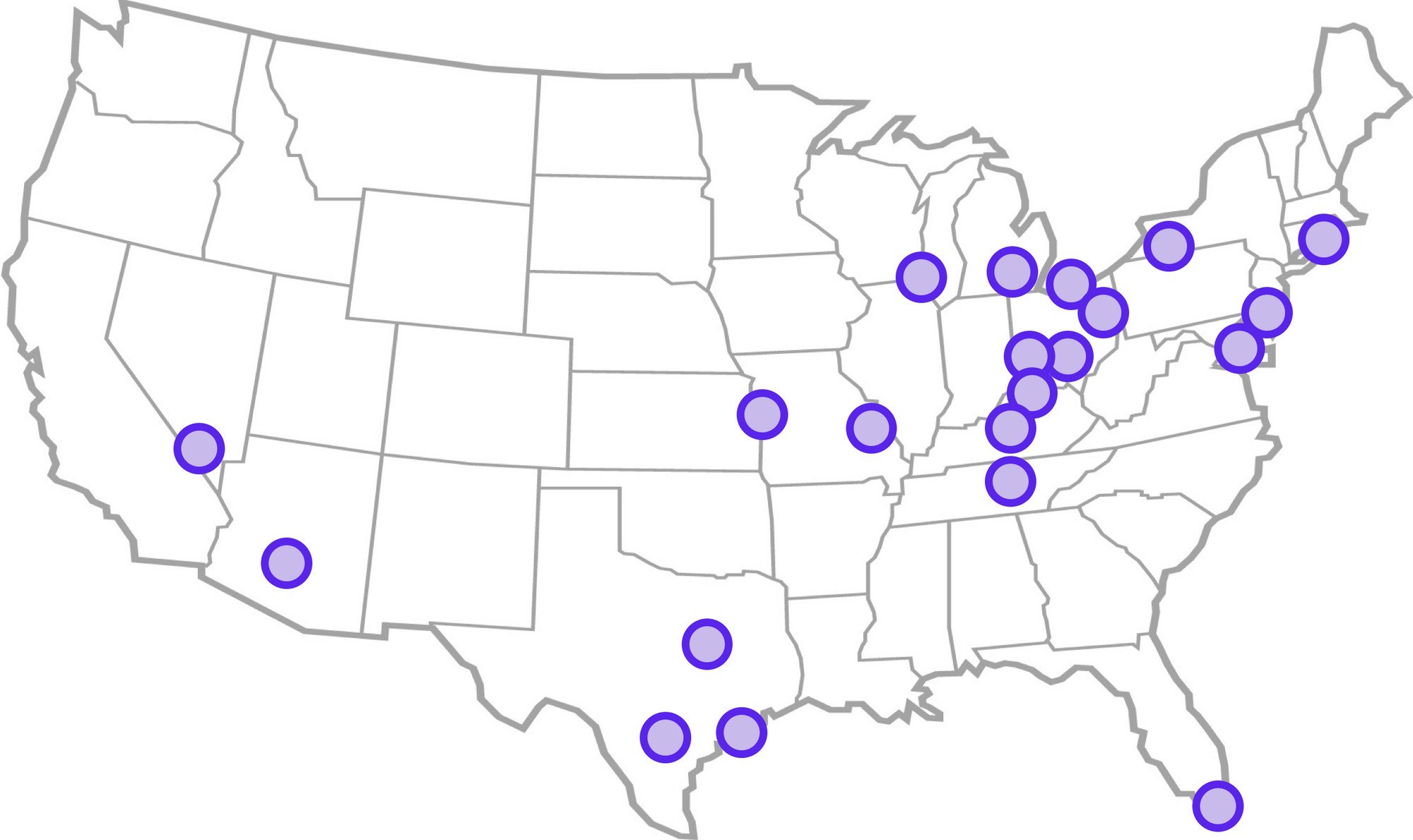